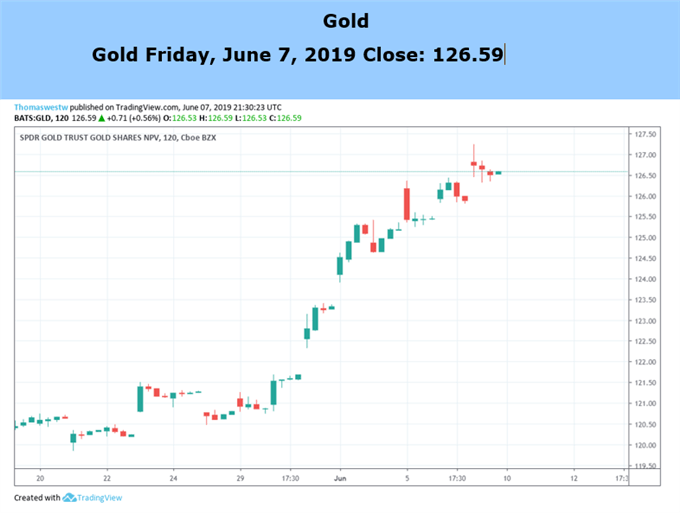 Join our analysts live for live coverage of all major economic data at the DailyFX Webinars.

Gold prices remain close to their 2019 peaks, buoyed up by a range of supportive factors which have added to the luster of all perceived haven assets.

Trade tensions remain very high of course, particularly between China and the US where signs of rapprochement are as elusive as ever. China is not the only economy in White House sights, and, while there seems to be some more trade geniality around between the US and Mexico, it is hard to be sure of anything until agreement is reached. It may be, but there’s no sign yet.

It seems all-too likely that trade news flow will continue to dominate short-term sentiment toward gold in the coming week.

It won’t be the only factor. The overall backdrop is becoming more friendly to non-yielding assets like precious metals as the yield on ‘risk free’ paper like Treasuries and German bunds heads lower. With German yields close to record lows markets are clearly nor pricing in much in the way of European growth ahead. Federal Reserve Chairman Jerome Powell last week said the central bank will act as appropriate to sustain expansion. Sure enough, investors are weighing the prospect of lower US rates.

One thing is certain. The global monetary scene will remain extremely accommodative for the foreseeable future, even if it becomes no more so. This low-rate environment should ensure that gold is at least underpinned even if the markets do get some better trade news in due course. Even solid signs of progress between Washington and those countries which have irked the White House with persistent trade surpluses may not be the magic cure for the global economy’s malaise which many clearly hope it will be.

The coming week will bring little in the way of first-tier economic data. European Central Bank President Mario Draghi will speak on Wednesday, a day which will also bring US Consumer Price Index figures. Both events could have some bearing on gold market action, but they are unlikely to move the story on enough to change the current mood.

That said gold has come up quite far, quite fast and, assuming that the trade story doesn’t meaningfully move on, it may pause for breath. It’s a neutral call from me this week.