Tech Sector: Highest Ratio to the S&P 500 Since Dot-Com Bubble

The tech sector continued its history of outperformance this week, as the XLK ETF reached record highs. Compared to the S&P 500, the sector boasts its highest ratio versus the index since the latter half of the dot-com bubble burst in January 2001. On a single stock basis, Apple once again approaches a $1 trillion valuation just months after it revised growth forecasts lower and spurred a UDSJPY flash crash. 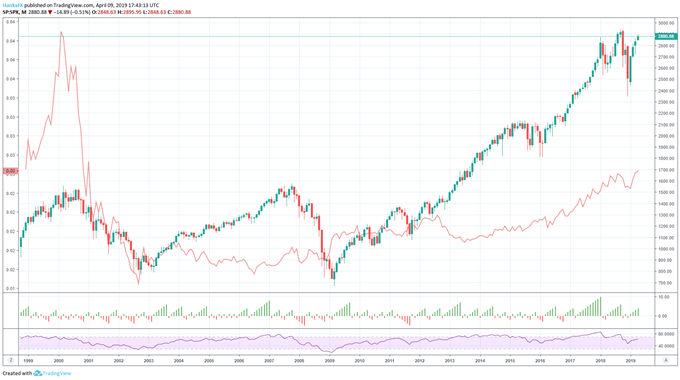 With the index itself grasping to recapture record levels, the strength of the current rally looks to be waning amid mounting headwinds ahead of Wednesday’s FOMC meeting minutes. Global growth concerns, trade war fears and earnings season jitters have all sought to derail investor sentiment just as some of the index’s favorite names have reclaimed their luster. Wednesday’s Fed minutes and a corresponding ECB policy decision may carry enough weight to deliver a meaningful shift in sentiment.

Tuesday’s “calm before the storm” tepidness was reflected in low trading volume (the lowest for the index in five months) for the S&P 500 and a slight increase in the VIX. Elsewhere, anticipation for the events was reflected in heightened implied volatility across several currency pairs – especially EURUSD. 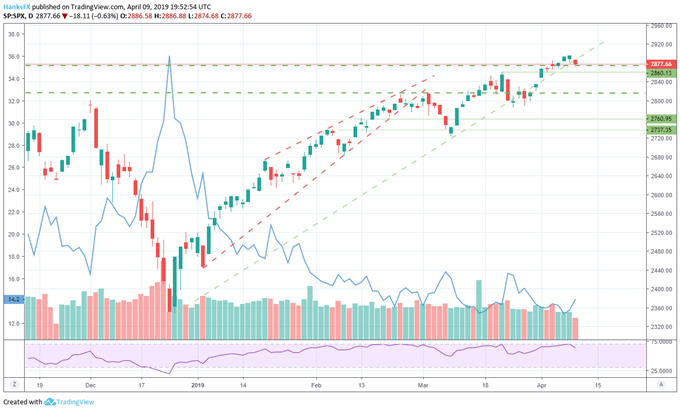 Given the nature of the events and increased liquidity and leverage offered in the currency market, it may be a more appropriate space to explore trading opportunities ahead of tomorrow’s event risk – even with cracks in the S&P 500’s armor.

Fresh quarterly forecasts are out! View Q2 forecasts for the S&P 500, US Dollar, British Pound and more.