At the National People’s Congress (NPC) meeting on March 5, premier Li presents his report on what monetary and fiscal policy approach the country should take. With a high leverage ratio and lower growth projections, he has stated that a prudent monetary policy approach would be best. He proposes a no stimulus plan and states that focus should be put on lowering taxes in order to help with the economic struggle.

In the NPC meeting, premier Li Keqiang presented his 2019 report for China. Premier Li communicated how the government would refrain from using stimulus in their policies and expect growth to be between 6-6.5%, lower than last year’s 6.5%.

Li went on to express how growth will come from tax policies (around 2 trillion yuan) and how it will help the manufacturing sector. He communicated how his plan is to avoid injecting liquidity into the market as well as having a prudent approach towards the monetary policy and to stabilize the leverage ratio.

The report released by the National Development and Reform Commission (NDRC) indicates that there will be an increase in flexibility for the yuan exchange rate and an increase in regulations when it comes to the cross-border capital flow. This in turn may stabilize the yuan since it will be more regulated and it will decrease volatility since the Chinese central bank has set a rule so that the yuan does not go higher or lower than 2 percent against the dollar. 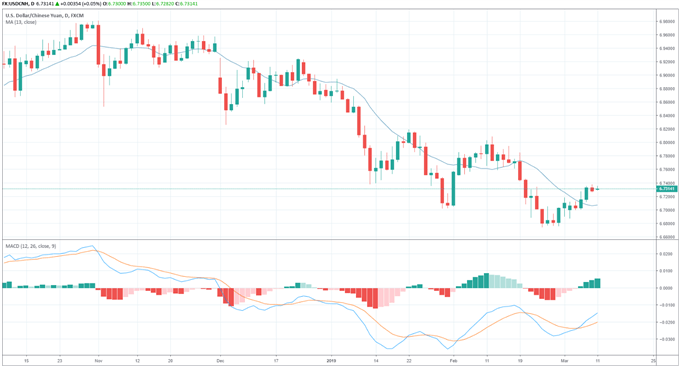 In the chart above, we can see that USDCNH was falling up until recently. The pair is a critical focus point for investors since both countries have a large influence on the global economy.

In the last couple of days, reports showed a 4.4% drop in exports and 7.6% drop in imports, which contributed to the appreciation of the USDCNH. However, despite the recent downtrend, the MACD is crossing above the signal line indicating that the trend may be turning bullish. Traders may also notice the MACD bullish divergence (i.e., USDCNH reached a lower low while the oscillator was at a higher low).

It will be interesting to see how this pair will trend as it has a critical impact on the global and overall health of the economy.