The Nikkei 225 will look to Friday’s interest rate decision from the Bank of Japan to influence price action. While no change to the 10-year yield target is expected, tone and commentary regarding the bank’s balance sheet may be a source of volatility for the index. As of Thursday, the index rests on the lower bound of a channel carved out from late December. Given the precarious position of the Nikkei, any indication that the bank may slow its balance sheet growth could see the channel rendered obsolete. 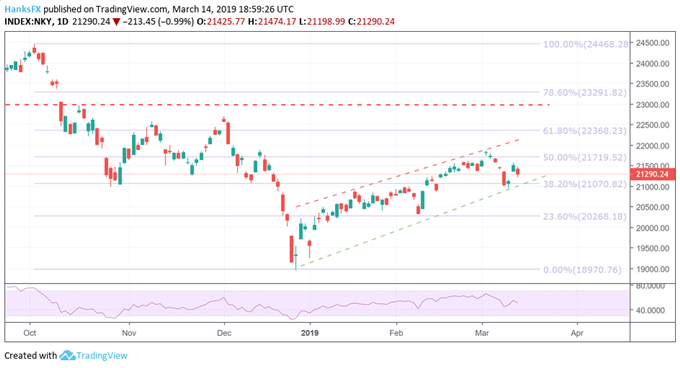 In recent years the BOJ has amassed considerable holdings on its balance sheet. As a form of expansionary monetary policy – the bank has purchased long-term government bonds, commercial paper – and Japanese real-estate investment trusts (J-REITS). Due to the bank’s purchasing activity in the space, it also owns roughly 70% of the Japanese ETF market according to Bloomberg. Consequently, the bank is a majority shareholder in an estimated 40% of all publicly traded Japanese companies. 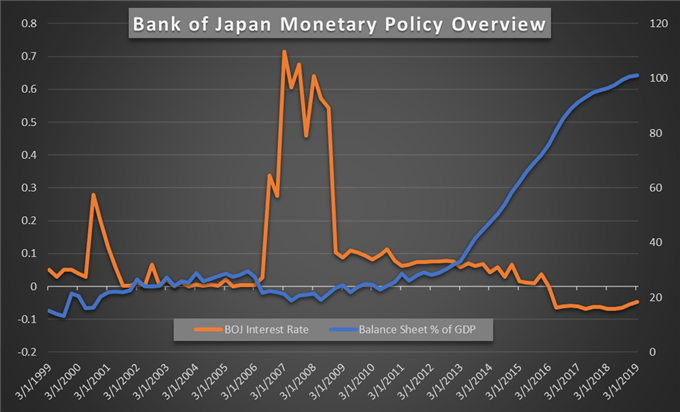 Similarly, the constant stimulus has resulted in the ballooning of the bank’s balance sheet as a percentage of gross domestic product. As of March 2019, the bank’s holdings are equal to roughly 104% of the country’s annual GDP.

As Japanese GDP translates to the world’s third largest standalone economy, their economic might allows BOJ policy decisions to influence foreign equity markets, albeit to a lesser extent than that of the Japanese economy.

With that in mind, Friday’s BOJ decision has potential to impact the S&P 500. Despite the Federal Reserve’s decision to slowly reduce the bank’s own balance sheet, the S&P 500 has continued to outpace the Nikkei 225 as growth fails to take root in the Japanese economy.

While the BOJ’s decision has market moving potential, the market reaction may be uneventful if history is any indication. Recent decisions have been met with expected outcomes as the bank looks to stand firm in its policy path – though the group’s assessment of economic activity and financial stability should be monitored closely along with a market response. That said, a more appropriate asset to trade for the event may be USDJPY with interesting setups present in the pair.