As the Dow Jones heads into Wednesday trading, the index will likely take its cues from Brexit proceedings and the developing situation with the Industrial Average’s largest member, Boeing. Tuesday saw UK MPs overwhelmingly vote down Prime Minister Theresa May’s revised Brexit deal. While the outcome was largely expected, the result delays a decision and prolongs uncertainty for European equities.

In the unlikely event the vote to exit the Union without a deal is passed tomorrow, it would likely deliver a shock to global equities. Given their proximity and degree of interconnectedness, European and North American equities could experience high levels of volatility on such an outcome.

See how IG clients are positioned on the Dow Jones, S&P 500 and the US Dollar with our free IG Client Sentiment Data.

As for domestic concerns, traders will continue to watch Boeing (BA) and developments from the investigations by the Federal Aviation Administration (FAA) and the company itself. Boeing has dragged the index lower since Monday when a Boeing 737 Max 8 crashed, marking the second such incident in the last five months. As one of the newer models offered by Boeing, the incidents have triggered concerns regarding the plane’s safety. Boeing shares reacted accordingly and suffered their worst two-day loss since 2001. 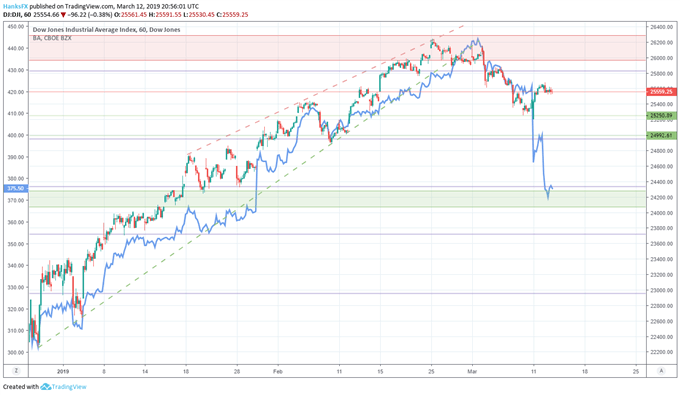 While the ongoing Boeing situation is not necessarily significant from a macroeconomic perspective, the corporation is afforded significant weight in the Dow Jones Industrial Average. Further, it is the largest US manufacturer. Given the weight commanded by Boeing, it can exert considerable influence over the index. 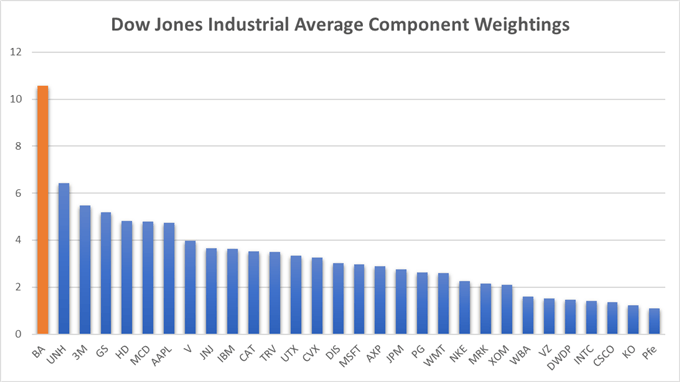 As of Tuesday’s open, Boeing accounted for 10.57% of the Dow. Should the FAA follow other aviation governing bodies in Europe, and parts of Asia and ground the model, Boeing could continue to drag the Dow lower. Since Monday, the Dow has been the worst performing major US index. 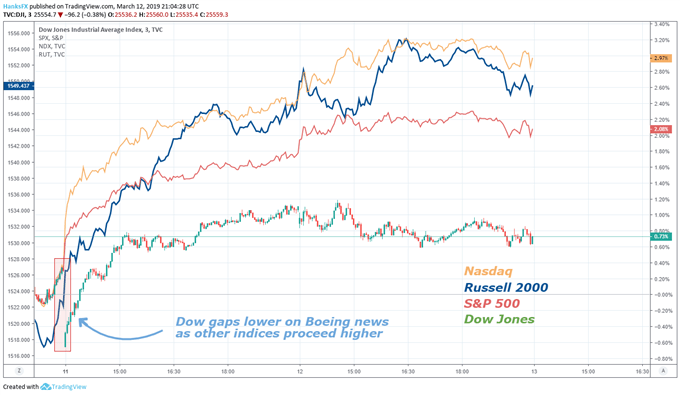 The Industrial Average will also await US durable goods orders from January. With durable goods categorized as longer-lasting products, the manufacturing and industrial components of the index may experience greater sensitivity to the data print than other sectors.