Wednesday will see the announcement of the Federal Open Market Committee’s rate decision. While the policy meeting is very unlikely to result in an altered rate forecast, a recovering equity market and robust economic data could see some officials strike a more hawkish tone than in months prior. The landscape could force Chairman Powell to walk the line between tempering dovish expectations and dinging equity sentiment with a hawkish tone. 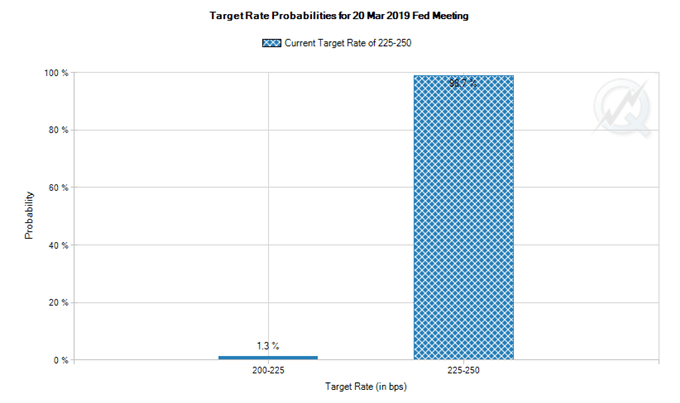 With the S&P 500’s recent break through four-month range resistance, the level should now act as support. Thus, a key level to watch in the event of a poor reaction will be 2,815. Subsequent support is less explicit but would likely exist near the bottom of the recent resistance band near 2,785. The Dow Jones finds itself in a less advantageous position but enjoys the benefit of a golden cross. However, given the fundamental implications of Wednesday’s FOMC decision, a surprise shift in policy could render technical levels obsolete. 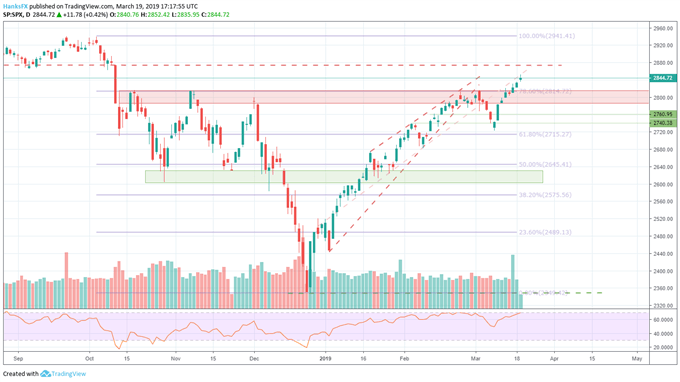 The potentially drastic implications from a shift in policy could also shake-up sector performance. While high-growth sectors such as tech and semiconductors may fall under pressure in the event of more hawkish tone, more defensive industries may see relatively lower volatility as investors seek their relative safety. That said, utilities and healthcare have witnessed substantial demand in recent weeks with the former firmly in overbought territory. 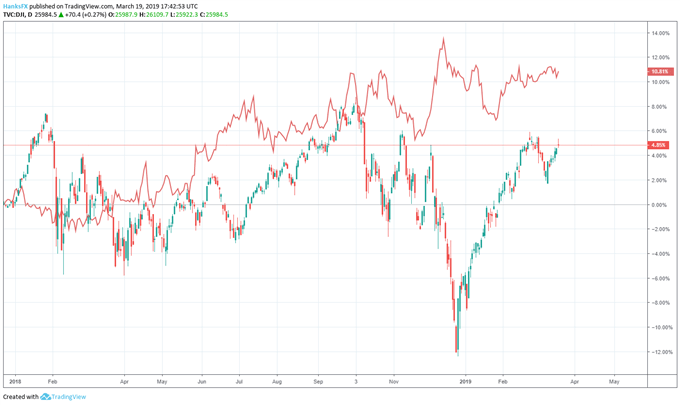 On the other hand, financials could find themselves in a unique position, enjoying some benefits from hawkish policy (owing to the connection between revenue and market rates) and riding the wave of broader equity sentiment in the eventuality of a dovish continuation. The XLF exchange traded fund – a fund that offers exposure to US financial stocks – has underperformed the S&P 500 in the last year, with particular weakness from early December 2018 when the dovish tone was first struck.

In the scenario where Chairman Powell suggests rate hikes may return to the table sooner than anticipated, XLF and the financial sector may see increased volatility and perhaps a return to parity. In any event, the monetary policy meeting is likely to spur price action across a litany of asset classes. For live coverage of the rate decision, join John Kicklighter on Wednesday at 1:45 EST.