The S&P enjoyed a bump on Friday from reassuring Non-Farm Payroll data. After a busy week for hard data out of the United States, next week looks to be much quieter – barring CPI and FOMC minutes. That said, next Friday marks the advent of earnings season which will undoubtedly spark price action for specific stocks, sectors and the index at large.

Second Quarter Forecasts are out! View forecasts for the S&P 500, US Dollar, Gold and more.

To kick off the season, JP Morgan, Wells Fargo and PNC Bank will report their quarterly results Friday before market open. The results are often looked to for insight regarding the upcoming quarter – in which financials may highlight the impact of dovish monetary policy. 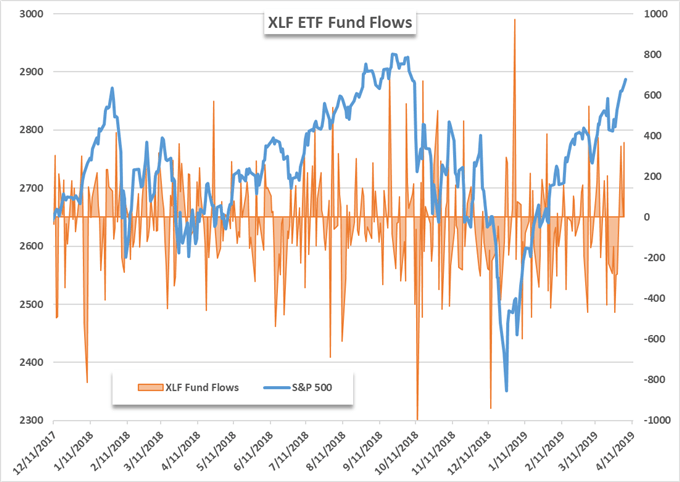 Perhaps in anticipation for next week’s releases, the XLF ETF notched its first week of net inflows in a month. XLF grants exposure to some of the country’s largest banks with Berkshire Hathaway, JP Morgan and Bank of America as its largest holdings respectively.

As of Friday, the ETF saw nearly $600 million in fresh funds, contrasting the $1.8 billion in outflows registered in the three weeks prior. The flows could suggest investors are confident in the sectors earnings outlook but could also be explained by simple capital reallocation due to weeks of outflows. In similar fashion, the three mega-cap ETFs notched a fourth-consecutive week of inflows. 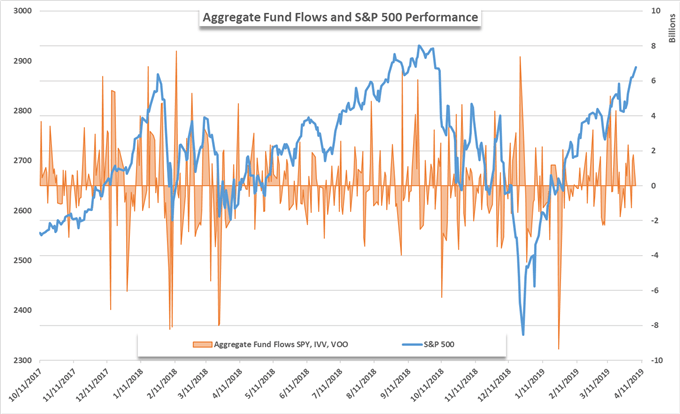 SPY, IVV and VOO continued their streak of net weekly inflows – now a month long. After a $2.6 billion aggregated inflow this week, the year to date total stands at nearly $3.8 billion. Last week I noted that investors were slow to buy into the recovery rally in January, moving funds elsewhere while the S&P 500 ascended.

Interested in trading Gold? The US-China Trade War may spur price action for the precious metal.

With a strong start to Q2, earnings season will have to be weathered for the index to continue its climb to recapture all-time highs. With the season fast approaching, the takeaways from last season may return to the forefront of investor concern. 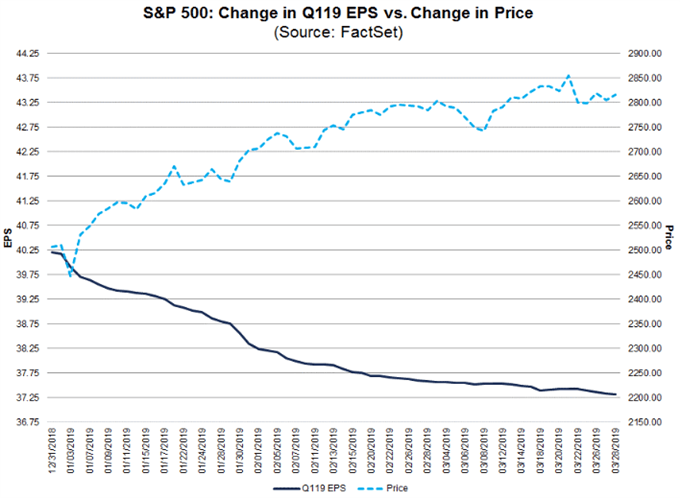 According to FactSet, earnings per share (EPS) in the first quarter faced notable decline while the S&P 500 pressed higher. Evidently, investor concern laid elsewhere as disappointing results were cast aside. As the upcoming earnings season begins, another relatively weak overall performance may begin to materially impact equity valuations and drag on the index. 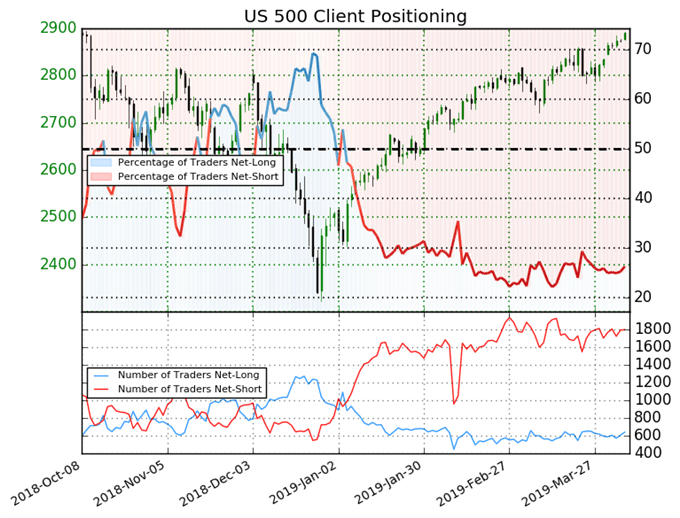 At present however, there are few signs to suggest fundamental headwinds have negatively influenced investor sentiment. In fact, overwhelming short exposure in IG Client Positioning suggests bulls are seeking a continuation to the recent trend.

We typically take a contrarian view to crowd sentiment, and the fact traders are net-short suggests US 500 prices may continue to rise. Positioning is less net-short than yesterday but more net-short from last week.