GBP: Today’s jobs report had been encouraging across the board with wages picking up, while the unemployment rate remained at a 44yr low. Consequently, GBPUSD pushed above 1.27, while EURGBP briefly broke below. While the firmer UK jobs data emboldens the recent hawkish commentary from BoE members, the fact remains the same in that the BoE are largely on the side-lines until Brexit clarity is found. As such, focus on Sterling will remain on who the next PM will be and how that will be impact the Brexit outlook. As it stands, the case for a 2019 rate hike remains doubtful.

NOK: One central bank that will continue its normalisation in interest rates is the Norges Bank. Softer than expected CPI pushed the NOK lower against the USD and EUR, however, volatile components (food prices, airplane tickets) had been the notable drags on inflation, which in turn is unlikely to derail the Norges Bank from raising rates next week. Alongside this, the latest regional network survey had been firmer, having highlighted that growth over the past 3-months had been the highest since Q3 2012, thus not only providing a green light for next weeks rate increase but also raises the potential that the central could perhaps raise its tightening path. This will also depend on how they see the impact of slowing global growth feeding into the domestic economy, which has been resilient thus far.

JPY: The Japanese Yen is softer across the board, with the exception of the New Zealand Dollar as increased risk appetite keeps equity markets bid. Alongside this, with US 10yr yields basing out around 2.06%, now trading at 2.17%, USDJPY has continued to edge higher towards 109.00. 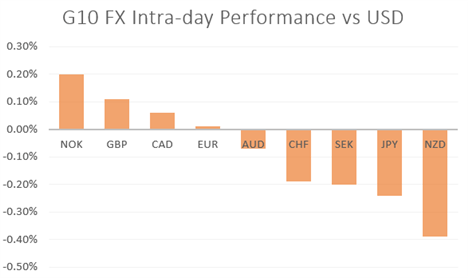