February’s industrial production rose by an expected 1.4% on the month, but this was merely some bounce back from January’s woeful 3.4% swoon. Production fell by 1% on the year, just a little better than the 1.1% slip expected.

Tokyo’s March Consumer Price Index rose by just 0.7% on the year excluding the volatile effects of food and energy costs. These data come out about three weeks before the national CPI and suggest that the Bank of Japan’s target of sustained 2% annualized price rises looks as elusive as ever.

February’s nationwide jobless rate fell to 2.3% from the 2.5% expected. Clearly Japan’s run of strong but utterly non-inflationary employment creation goes on. Retail sales rose by just 0.4% on the year, well below the 1% gain hoped for.

The Japanese Yen has been gaining modestly on the US Dollar into the data, but the process was halted by the releases and USD/JPY seemed to find a floor. 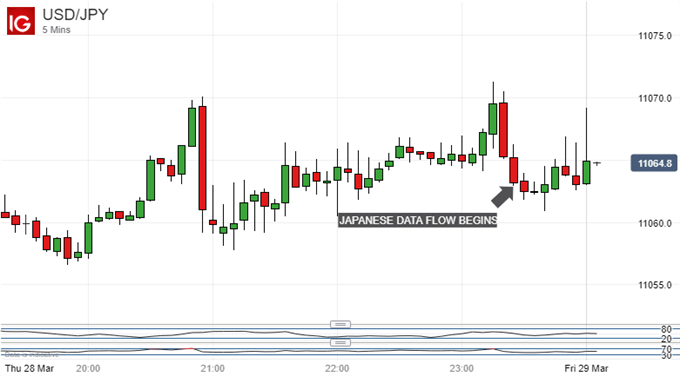 In truth these numbers merely confirm what just about every Japanese Yen investor must already know- that Japan’s economy continues to recover modestly despite global growth worries, but with pricing power still largely absent.

On its broader, daily chart, USD/JPY bulls continue to fight back against the topping out process evident by the pair’s failure to retake the peaks of February and mid-March. For the moment those bulls are making a fight of it at JPY110.07 support, which probably not coincidentally is the second, 38.2% retracement of this year’s rise. 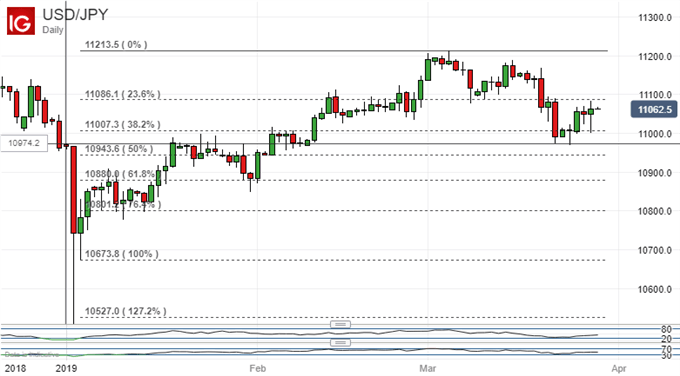 However, they have so far failed to retake the first retracement level which comes in at 110.86. They’ll need to do that and more if they are to avoid the obvious lower-low which seems to be forming on the daily chart.