MXN: The Mexican Peso plunged overnight after President Trump surprised markets through announcing that the US will place 5% tariffs on all Mexican goods, further dampening risk appetite, while Mexican exposed stocks (autos in particular) had also dragged equities lower. That said, the 3% drop in the Peso looks to be somewhat stretched with the move exacerbated by heavy long positioning in the currency (net longs highest since 2014).

JPY: The Japanese Yen is the notable outperformer in the G10 space as safe-haven flows support. Subsequently, USDJPY has made a break below the 109 handle with support at 108.50 eyed.

EUR: Despite the drop in German inflation, which raises the risk of softer Eurozone inflation, the Euro is managing to hold firm as month-end buying in EURGBP provides support for the currency, while an unwind of the Euro funded carry trades in the Mexican Peso has also underpinned. Reminder, the Euro had been many traders funding currency of choice when going long EMs. However, gains in the Euro remain limit given the downside risks stemming from the uncertainty around Italy. Of note, the 5-Star party announced that it would support the tax cut plan, which is likely to see the budget-deficit target raised. Alongside this, eyes will be on next week’s ECB meeting with Draghi and Co. set to stick to the dovish script.

USD: The US Dollar has failed to find comfort from the increased trade war uncertainty with the greenback modestly lower, albeit holding onto the 98.00 handle. Elsewhere, yesterday’s speech by Fed Vice Chair Clarida has also kept gains in the USD limited after opening the door to a potential rate cut provided downside risks to the economic deteriorated further.

Crude Oil: Oil prices are once again on the backfoot as souring risk sentiment weighs on the commodity. Consequently, oil prices are now on course for its worse monthly since the November sell-off with Brent crude futures down over 14% for the month. 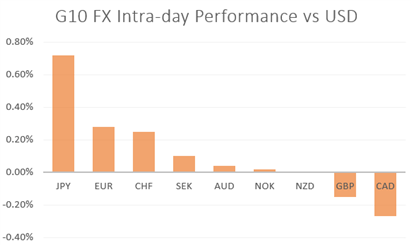 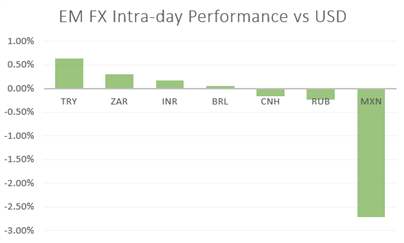