The Japanese Yen is now a clear winner in its battle of the havens with the US Dollar. Global risk aversion largely rooted in the intensification of trade war between China and the US has seen USDJPY retreat very close to its lows for the year, which were made in early January.

Technically speaking the pair now flirts with a decisive break of 108.43 on its daily chart. That point is significant because it marks the fourth, 61.8% Fibonacci retracement of the rise up from the lows of March 2018 to the peak of October the same year. That peak has not been topped since.

If a break lower through it is confirmed then the Dollar will find itself in a zone of support between that point and 106.97 which is the final retracement point before the pair is looking at total negation of the entire rise. 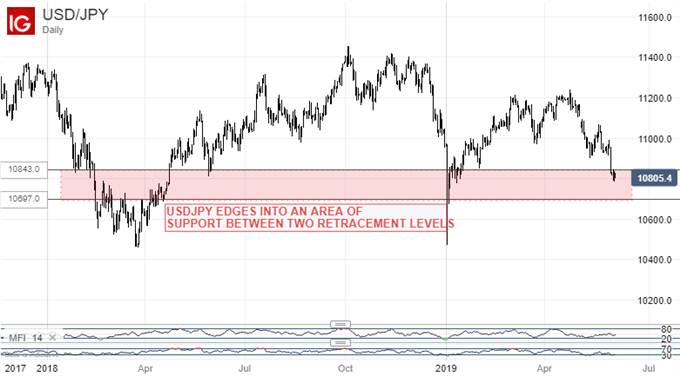 Upside forays seem unlikely for the moment although USDJPY may yet be building something of a daily chart base around current levels. It remains firmly stuck in a steep downtrend though, and the heavy down day of May 31 will require more bullish resolve to claw back than the bulls have so far managed to demonstrate. 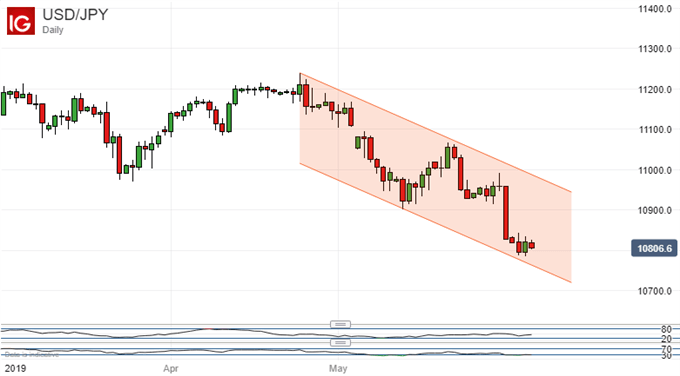 The pair does seem to be resisting a test of downside channel support, but that resistance seems far from assured. Should that support break focus could turn to that final 106.97 retracement quite fast.

A look around the other Yen crosses finds the Japanese Unit on the front food against all its major rivals, which is perhaps unsurprising given the current risk averse environment.

NZDJPY is back to lows not seen on a daily closing basis since late 2012 on its monthly chart, although it has been lower more recently on two occasions intraday.

The pair’s downtrend has been quite gradual however and, while it’s too soon yet to suggest that the lows of 2012 will be retested this year, it seems quite possible that they will unless the fundamental backdrop improves considerably.