The Japanese Yen remained under broad pressure Thursday as the Bank of Japan left all its monetary policy setting unchanged and committed monetary easing as it downgraded growth forecasts.

That means that the key short-term rate stays at -0.1%, the ten-year Japanese Government Bond yield target is 0.0%. The BoJ also revised its 2019 GDP growth call for the current fiscal year down to 0.8%, from 0.9% with a similar-sized cut to next year’s forecast which is now 0.9%.

In a statement the BoJ also said that interest rates will remain at low levels for an extended period and, interestingly, ‘at least’ through until spring of next year.

The central bank has been striving for years to stoke some pricing power in Japan but, despite massive, unprecedented stimulus, inflation remains stubbornly low. The BoJ remains publicly committed to its target of getting consumer price rises sustainably up to an annualized rate of 2%; the current rate is just 0.5%.

It certainly seems highly unlikely that inflation will be durably back to target by next spring, so market debate will no doubt focus on whether the BoJ means that policy could be tightened then regardless, or whether- and more probably- that low rates will simply be extended.

Moreover the BOJ did indulge in some de facto monetary tightening just last week, when it cut its monthly asset purchase target to JPY160 billion ($1.43 billion) per month, from its previous total of JPY180 billion. If this process continues focus could well grow on that inflation target, and the possibility that it could be changed even if inflation does not rise as worries about the effects of such long-term monetary accommodation grow.

USD/JPY had been drifting lower through the session and the BoJ’s announcement didn’t stop that process, coming in largely as expected. 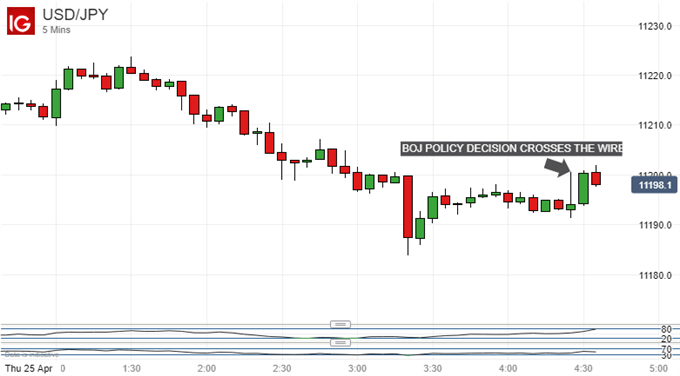 However, on its daily chart the Japanese Yen remains utterly defensive against the US Dollar. Despite plentiful economic uncertainties global risk appetite is holding up remarkably well, supported in turn by reasonable corporate earnings out of the US and enduring hopes for a trade settlement between China and the US.

The US Dollar retains a massive yield advantage over Japan, even as the markets move to price in a more cautious Federal Reserve through the remainder of 2019. 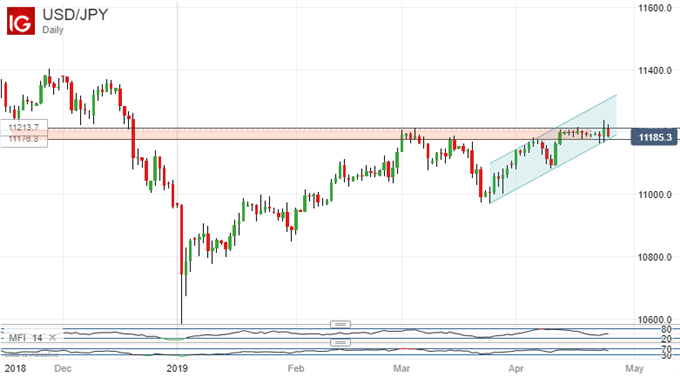 Healthy risk appetite tends to weigh heavily on the Japanese Yen as it often prompts investors in Japan to seek better returns elsewhere.

USD/JPY is now flirting with the top of a trading range which encompasses the last significant peak, that of late February and early March. It guards the way higher to the tops of late 2018, which seem likely to be tested once again in due course should that risk appetite hold up.