The Japanese Yen remains on the defensive against the US Dollar with USD/JPY still quite comfortable at two-month highs.

Admittedly a bit of range trading has in the past few days replaced the more obvious uptrend on the daily chart. But long Easter holiday weekends probably account for much of this and the lack of much profit taking before the break suggests a degree of enduring bullishness. 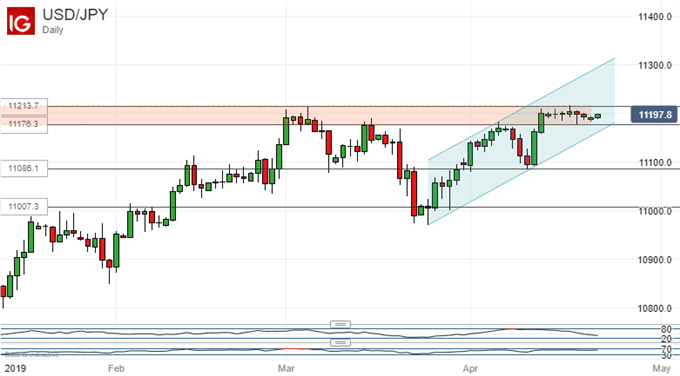 For now, the pair remains stuck in the narrow channel between 111.76 and 112.14. This area was as high as the last significant upward foray got in early March and will have to be surmounted if Dollar bulls are going to push on and claw back even more of the steep falls seen between November 2018 and January this year. Gains since have made back about 80% of the slide but the assault on last year’s peaks above 114 will probably remain a more gradual affair.

For the moment bulls can still dare to hope for as long as the current range holds. Indeed, they can probably remain optimistic as long as channel support at 111.56 or so remains firm.

Below that the first and second Fibonacci retracements of this year’s rise lie in wait, at 110.86 and 110.07, respectively. USD/JPY would probably have to fall enduringly below both to fully negate this latest upward attempt.

The Australian Dollar’s daily chart against the Japanese Yen has become a little more interesting in the past week or so. AUD/JPY has managed to get above the broad trading range which had previously bounded the action since early January.

However, as you can see from the chart above it has hardly done so with much conviction and Aussie bulls may not have much longer to stake their claim to this new altitude. As with USD/JPY the uncommitted may be well advised to wait and see how much bullishness returns to this market with the return of fully staffed trading desks, particularly in Australia, later this week.

Support at the old channel top of 0.7892 doesn’t look very strong though.