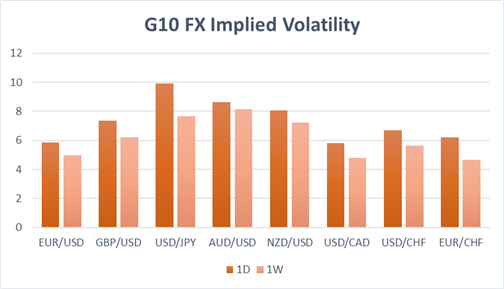 Across the G10 FX complex, implied volatility has picked up in the Japanese Yen amid the rising US/China trade war tensions, while Australian Dollar implied vols have also risen with key Aussie jobs data also being a factor for the rise.

USDJPY: As the equity market sell-off continues with both the US and China raising tariffs, this has spilled over into FX markets with investors seeking protection against further Japanese Yen gains, which has been the notable beneficiary of the renewed trade war concerns. With USDJPY reaching a new 3-month low having broken below 109.50, 1-week risk reversals show that demand for USDJPY puts (over calls) have surpassed the 2019 flash crash levels and are now at the highest since last years VIX explosion (Feb 2018). As such, with speculators still very much short the Japanese Yen, there is a risk of further short covering, which in turn could see JPY gains persist as the economic outlook softens. Implied move for the week is at 90pips. AUDUSD: Aside from the fallout of the US/China trade war, key Aussie data will be in focus in particular, the latest jobs report. The resilient labour market has been among the bright sparks in an otherwise dim economic environment of the Australian economy, which saw the RBA refrain from lowering interest rates to a record low 1.25%. However, a rate cut is likely on the way for Australia with inflation continuing to undershoot the RBA’s target and confirming one would be an uptick in the unemployment rate in Australia. As it stands, investors continue to seek cover for further AUD losses with 25D risk reversal at -1.025, while break-even straddles imply a weekly move of 63pips.