See our quarterly JPY forecast to learn what will drive prices throughout Q2!

This week have seen investors move into safer assets with equity markets coming under notable selling pressure following President Trump’s pledge to raise the tariff rate to 25% from 10% on $200bln worth of Chinese goods. Consequently, this has seen China state that they will retaliate, thus bringing back trade war concerns to the forefront of investors minds as a deal in the near term has been put in doubt.

In reaction to the dampened sentiment, the notable beneficiary has been the Japanese Yen, rising 0.9% against the USD since Sunday, while gold has been the next best asset, gaining 0.3% with the USD the laggard having shown a marginal 0.15% increase. 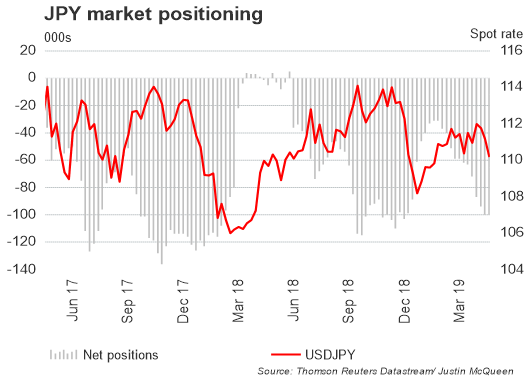 As had been highlight in the weekly COT report (full story), speculators had been notably short the Japanese Yen with gross shorts outweighing gross longs by 5.8:1, which in turn saw net shorts equating to $11bln. As a reminder, previous crowded shorts in the JPY had soon been followed by notable short covering, sparking a flash crash in JPY pairs (full story). With this in mind, the dampened risk sentiment suggests that risks are to the upside for the JPY, which is now trading at a 3-month high against the USD index after USDJPY dipped below 109.70 (Mar 25th low). 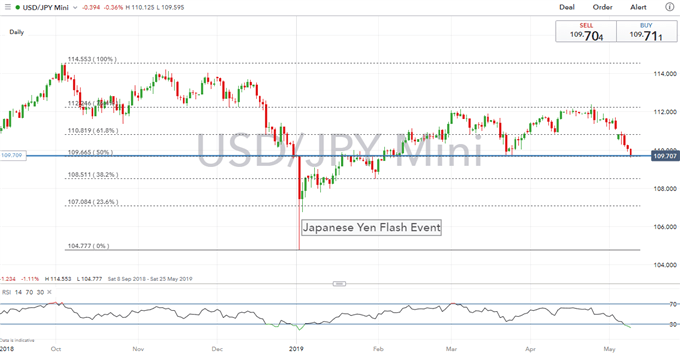 USDJPY: The pair briefly printed a 3-month low, now hovering around 109.70, eyes will be on for a close below 109.66, which could exacerbate losses for a move towards the 109.00 handle, while wider support is seen at 108.50. On the topside, resistance is situated at 110.00, in which a break above may ease some of the bearish momentum. For trade war barometer look to AUDJPY, which trades at the lowest level since early January, support situated at 76.00-20.

GOLD: Despite breaking above the resistance at $1287, gold prices failed to make a close above which in turn keeps the tight weekly range intact. Given the softer sentiment eyes will be on for another push higher in which a firm break above exposes a move towards the descending trendline from the 2019 peak.

What You Need to Know About the Gold Market