EUR: ECB pushed back rate guidance, while the announcement of TLTRO 3 details were more favourable than the markets had expected (full story), which in turn saw the Euro jump to session highs on the release. However, while EURUSD touched yesterday’s high at 1.1307, as the central bank upgraded its near-term growth and inflation forecasts, gains had been pared slightly as Draghi stated that some members had discussed rate cuts, QE restart and further extension to rate guidance. Alongside this, Draghi noted that it was not correct to assume that the ECB’s guidance is in reference to rate hikes and instead highlighting that there is room for lower interest rates.

JPY: Safe havens remain on the front foot amid the dip in equity markets as President Trump signals that he is considering extending tariffs to China on the remaining $300bln worth of goods. The President noted that he will make his decision after the G20 summit at the end of the month. USDJPY remains supported at 108 handle for now, while topside resistance sits at 108.50.

GBP: The Pound managed to push through the 1.27 handle amid the continued pullback in greenback once again. Alongside this, GBPUSD saw a brief spike to highs of 1.2720 after BoE Governor Carney stated that rates will need to be raised if the economy evolved as they expect. However, the move was short-lived given that the BoE are forced to remain on the side-lines amid the Brexit debacle, which is unlikely to be resolved in the near-term.

MXN: The Mexican Peso is on the backfoot across the EM complex after hopes of a trade agreement between the US and Mexico faded, while a sovereign rating downgraded by Fitch added to further losses in the currency. 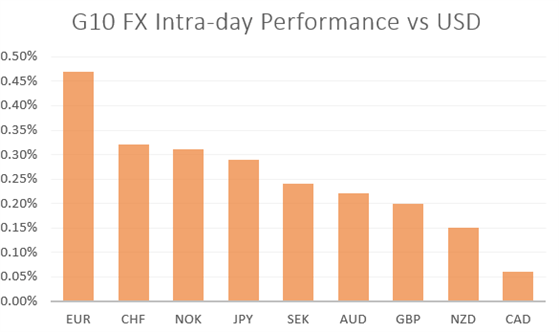