– Bitcoin prices have hit a fresh yearly high as the Turkish Lira has slumped into a 2019 low.

– Turkish 5-year CDS prices have hit a fresh 2019 high and are at their highest level since September 2018.

– The rolling one-week (0.79), one-month (0.64), and three-month correlations between BTCUSD and USDTRY prices are statistically significant as well (0.93).

After a strong start to 2019, cryptocurrencies look to continue their strength in May. Although well beneath its all-time highs, Bitcoin has rallied 52.6% in the year-to-date and boasts an 11% return in the month of May alone. Although the most popular, strength has not been limited to Bitcoin as emerging market weakness looks to bolster crypto prices.

Ethereum has climbed 22.5% in 2019 with a 7% gain in May. A standout performer in Litecoin remains a coin to watch, with a 3.7% return in May, resulting in a year-to-date return of 133.3% Although emerging markets are pressured, Ripple remains a laggard in the crypto world. XRP prices have slumped -2.74% in the month of May and -16.25% over the five months prior.

Why Does Crypto Benefit When EM FX Suffers?

Bitcoin and cryptocurrency on the whole are not safe haven currencies per se, as they lacks several key features, main of which is a ‘stable store of value.’ But given the digital nature of the cryptocurrency market, coins and tokens can be used as an intermediary to move capital around discretely outside of the purview of governmental authorities.

Why would a market participant want to move capital around with discretion? If capital controls are in place, then it may be impossible to render the production of goods or services at fair value, especially in an emerging market economy. In addition, whenever partisan politics spill over into governance – be it the fiscal side (via elections) or the monetary side (via central banking independence) – local market participants may find that instability in the local emerging market currency dictates a need to find a more stable alternative.

Latest Gains by Bitcoin May Be Tied to Turkey

After local elections in early-April and then a government-directed removal of the rate hike bias, the Turkish Lira came under renewed pressure unseen since October 2018. Now, ghosts of the April election are coming back to haunt the Lira: Turkish President Recep Tayyip Erdoğan’s government has successfully petitioned the country’s (non-independent) high election board for fresh elections.

Pricing in a continued erosion of the barrier between independent policymaking and politics in Turkey, traders have once again sent Turkish 5-year CDS prices to their highest level since September 2018 – the last time EM FX contagion fears roiled currency markets. At their low point this year, Turkish 5-year CDS were priced at 297.5-bps on February 5; today, the Turkish 5-year CDS stands at 465.3-bps. 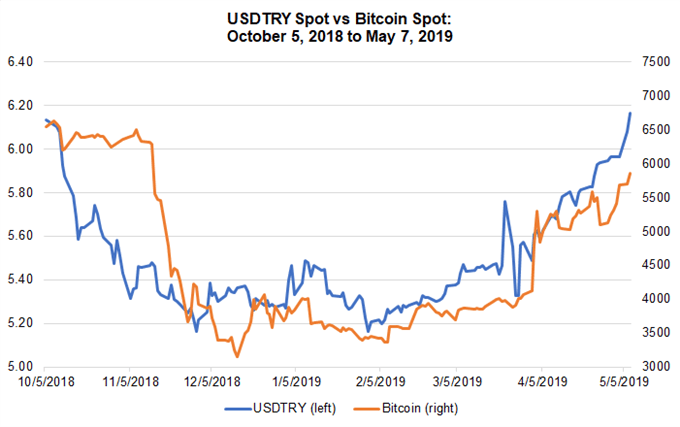 As has been the case for the past several months, we’ve continued to witness how strength in cryptocurrency markets goes hand in hand with weakness in emerging market currencies. Since the start of September 2018, we’ve seen that Bitcoin prices and the Turkish Lira have traded in, effectively, a diametrically opposing fashion.

In other words, when the Lira has rallied, Bitcoin has weakened (September to December 2018); when the Lira has depreciated, Bitcoin has strengthened (January to present). Since September, the correlation between Bitcoin and USDTRY has been a statistically significant 0.76. Meanwhile, the rolling one-week (0.79), one-month (0.64), and three-month correlations are statistically significant as well (0.93).

Accordingly, there is no reason to think that the strategy perspective from early-April has been invalidated yet: what’s bad for EM FX, particularly the Turkish Lira, is good for Bitcoin prices and the cryptocurrency market in general. Indeed, if Bitcoin prices and the cryptocurrency market are going to continue their 2019 rebound, the best bet remains more weakness in emerging market currencies like the Argentinian Peso and Turkish Lira.