According to the 1-week implied volatility reading on the DXY US Dollar Index, expected price action has risen from a low of 4.79 percent last Thursday to 5.86 percent today. The recent jump in currency market volatility is primarily owed to the bombshell tweets from US President Trump on Sunday as he threated to raise tariffs on China with trade talks reportedly breaking down between the world’s two largest economies. 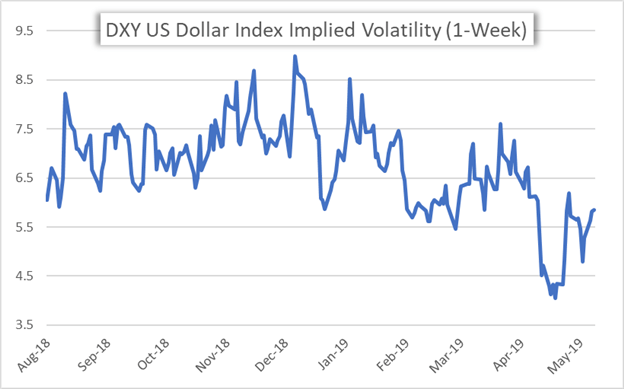 Although currency volatility measures remain relatively subdued across the major USD crosses, implied volatility on the DXY US Dollar Index still appears like it is beginning to trend higher. The recent jolt of risk has potential to escalate further if a resolution is not quickly found between the US and China over their ongoing trade war. 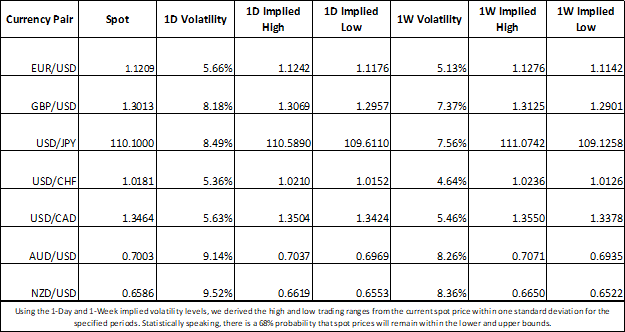 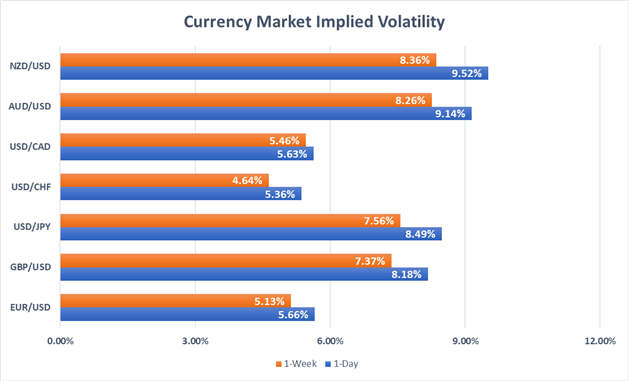 With major event risk for the New Zealand Dollar in hindsight, NZDUSD implied volatility has dropped from multi-year highs after a dovish RBNZ cut its policy interest rate. Although, uncertainty over the outcome of ongoing trade talks between the US and China has caused NZDUSD implied volatility to tick higher on balance. This is likely due to New Zealand’s high level of dependence on economic activity out of China – the risk posed by elevated trade deal tension has consequently weighed on expected price action in the Kiwi.

Likewise, the size of price swings in the Japanese Yen has also risen as of late. Spot USDJPY has recorded a string of moves lower amid the recent shift by traders towards ‘anti-risk’ in response to the flareup in trade war uncertainty and the accompanying headwind to global economic growth it could pose. In fact, USDJPY 1-week implied volatility currently sits at 7.56 percent – well above its year-to-date average of 5.74 percent.

While both NZDUSD and USDJPY have been undoubtedly impacted by the latest US China trade war developments, currency price action in the Chinese Yuan and Mexican Peso also reflect heightened market risk and uncertainty. CNY has come under pressure as forex traders reflect the reduced likelihood that the US and China reach a deal this week which pushed USDCNH above the 6.8000 handle to its highest level since January. 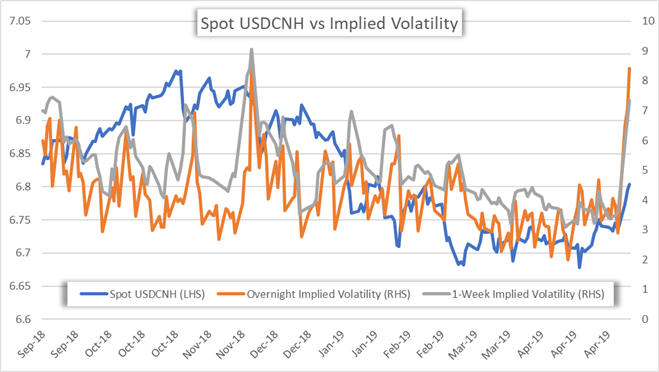 Moves in USDCNH could signal trade talks between the US and China are deteriorating if advances in the currency pair are considered to suggest a reduced likelihood that a trade agreement will be reached. The decline in spot USDCNH prior its spike higher over the last few days was driven primarily by growing expectations that there would be a Sino-American trade war resolution. With USDCNH overnight and 1-week implied volatility at 8.41 percent and 7.35 percent respectively, which are the highest readings since December 2018, forex markets are still anticipating heightened price action.

That being said, the outcome of trade talks this week will likely dictate where CNY heads from here and cause USDCNH to either whipsaw lower or exacerbate its move higher. While tweets early Wednesday from President Trump seemed optimistic that Chinese negotiators are still coming to the US for a trade deal this week, officials from China have stated that they plan to retaliate on Trump’s tariff increase scheduled to take effect Friday.

Turning attention to the Mexico Peso, USDMXN implied volatility jumped to 12.47 percent and 9.89 percent for the overnight and 1-week tenors respectively. Since the trade war has dampened economic activity between the US and China, Mexico has taken place as America’s top trading partner. As tariffs on Chinese goods have stymied the country’s exports to the US, Mexico has reaped the benefits by increasing its own exports to the US.

However, weak import demand from the US was reflected in Mexico’s GDP report released late last month in addition to dampened consumption and business investment. Uncertainty surrounding trade policy from the US – including the pending USMCA deal – has been labeled as a primary factor to recent weakness in Mexico’s economic data.

Also, with Mexico’s CPI slated for release Thursday at 13:00 GMT, this high-impact economic event could expose USDMXN to additional price swings over the short term. Judging by USDMXN overnight implied volatility, currency traders might expect spot prices to fluctuate between 18.9458 and 19.1946 with a 68 percent statistical probability over the next 24 hours. If April year-over-year inflation in Mexico is reported below expectations of 4.4 percent, the Peso could weaken further against the greenback. Conversely, a better than expected CPI number has potential of pushing USDMXN lower.