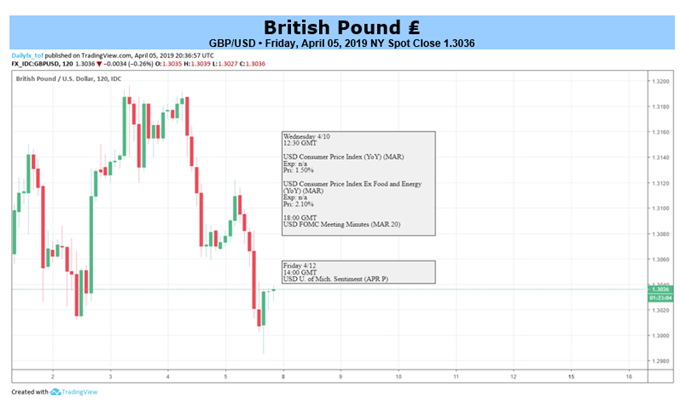 The DailyFX Q2 GBP Forecasts are available to download including our short- and medium-term look at Sterling.

UK Prime Minister Theresa May this week reached out to the leader of the Opposition Jeremy Corbyn in a renewed attempt to break the current Brexit deadlock. The cross-party talks were said to have been constructive but inconclusive but the olive branch from the PM while angering some of her Party is seen by many as finding a way to leave the EU, however ‘soft’ the plan is. This week also saw Parliament vote for a bill to stop the UK from leaving the EU without a deal although as yet this is not a legal position. And to end the week, UK PM May asked the EU for an extension to Article 50. until June 30 to help break the deadlock. In response, the EU is expected to turn down this request and instead offer the UK a one-year ’flexible extension’ with the inclusion of a break clause if the UK ratifies a deal with the EU.

This week’s moves point towards a softer Brexit outcome although there is still a possibility of a General Election that could spark volatility. GBPUSD seemingly remain bid around the 1.3000 level but despite the positive news the current – small – soft Brexit premium built into Sterling is being gently eroded. It may be that Sterling traders are starting to tire of this whole process and see a one-year ‘flextension’ as more of the same. While Sterling is one of the most popular trading currencies, there may be better opportunities elsewhere in the FX market where fundamentals are clearer and, more importantly, where chatter matters less.

The UK data calendar is quiet next week apart from Wednesday when trade balance data, industrial and manufacturing figures and the latest look at monthly and 3m/3m GDP are all released at 08:30 GMT. EURGBP traders will also be interested in the latest ECB monetary policy meeting on the same day and President Draghi’s press conference afterwards.

IG Client Sentiment data show 70.0% of traders are net-long GBPUSD. We typically take a contrarian view to crowd sentiment, and the fact traders are net-long suggest that GBPUSD prices may fall. However, if we factor in recent daily and weekly positional changes, we get astronger GBPUSD bearish trading bias.