The US Dollar had its worst week since August as DXY fell about 0.80%. Weakness was partially owed to a broadly stronger British Pound, which rallied the most when the UK Parliament voted to reject a ‘no-deal’ Brexit in any circumstances. Meanwhile, the S&P 500 trimmed its losses from the previous week, sapping demand for safe havens and the highly liquid Greenback.

As such, this allowed for some ASEAN currencies to gain ground against the US Dollar. Most notably was USD/SGD which tends to have a close positive correlation to the Greenback. The same could not be said for the Philippine Peso, which continues to selloff after the central bank’s new governor brought with him dovish rhetoric. Meanwhile, the Indonesian Rupiah trimmed losses after local exports contracted more than expected. 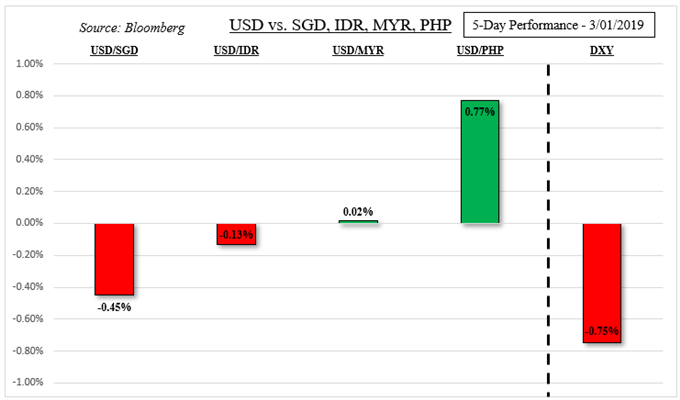 The week ahead contains multiple central bank interest rate announcements, both regionally and externally. Beginning with the former, the Philippine Peso may weaken on the Bangko Sentral ng Pilipinas (BSP) monetary policy decision. While rates are anticipated to be left unchanged, the central bank’s new governor, Benjamin Diokno, may allude to easing in the future and confirm hopes to cut banks’ reserve requirement ratios.

Philippine inflation has significantly slowed from a peak of 6.7% y/y towards the end of last year to now 3.8% in February. This is within the BSP’s target range and if it remains there, perhaps reaching the lower boundary, it may open the door to a cut down the road. Falling oil prices (towards the end of last year) have played an important part as the commodity is a key import.

Meanwhile, the USD/IDR looks to the Bank of Indonesia where rates are also seen to be left on hold. The Indonesian Rupiah has been weakening versus the US Dollar since February as the central bank remained on hold. Watch for what they have to say about the fundamental value of the Rupiah. The central bank has been intervening as they believe the currency to be undervalued. More of the same rhetoric may boost IDR.

All eyes will be on the Federal Reserve this week with Fed funds futures pricing in a 32.3% chance of a cut by the end of this year. This means markets are anticipating the central bank to downgrade their view on interest rate hikes this year. Having said that, leaving the door open to just one increase is still more hawkish than what markets anticipate.

As such, risks for the US Dollar are arguably tilted to the upside as it would take a surprisingly cautious announcement to fuel dovish bets. If the Greenback rallies, then USD/SGD is likely to follow higher. Meanwhile, technical warnings hint USD/MYR may rise in the medium-term.

For updates on the Philippine Peso, Malaysian Ringgit, Singapore Dollar and Indonesian Rupiah, you may follow me on Twitter here @ddubrovskyFX for more timely updates. I will also be updating the technical forecast later this week.