Learn about the cycles that markets move through from low volatility to high, and see consider whether 2019 will see a financial crash for stocks and/or other asset classes.

Volatility is an important feature of the financial landscape. With it, we can determine whether to pursue greater return or protect our capital at all costs. Trading strategies like range, trend and breakout approaches can be honed by the measures or it can simply be used to judge when to switch between the disparate tactics. Yet, just as with any observation of a market, there are also be points of extreme. Typically, market participants – and financial headlines – seize and react to the historical highs in these conditions. That makes sense as the insinuation is a storm for the markets that investors would need to batten the hatches against or traders move quickly in order to take advantage. Perhaps even more important, however, are the periods through which activity readings sink to extraordinary lows. It is from these phases of quiet where complacency calcifies, and the makings of eventual eruptions are borne.

Our Present State of Volatility Conditions

Through the opening quarter of 2019, we have seen material drop in the perception of risk. There are a few ways that we could derive this open assessment of otherwise abstract conditions. The most popular method is to simply refer to the performance of a general benchmark. In the case below, we have the S&P 500 which as the most heavily traded (through derivatives) index of the world’s most popular asset type (equities) and from the largest economy in the world serves the role nicely Its slow climb back towards record highs suggests there is appetite for greater exposure to chase higher returns – capital gains and/or passive income – with a comparatively lower sense of risk.

For those that have been involved in the market for a little longer, there are more quantitative methods for which investment decisions are based. Just as familiar as the S&P 500 is for participation, the VIX Volatility Index from the CBOE is perhaps the most recognizable implied (or expected) measure of activity on the world stage. It determines the anticipation for market volatility from options on the underlying equity benchmark set out approximately 30 days into the future. In contrast, there are measures of ‘realized’ or historical volatility that can be derived from the price action of any asset whether through the scale of swings, pace of momentum or frequency of corrections. In the same chart below, we have a 20-day ATR (average true range) based on the S&P 500’s price action. Despite the implications of supposed forward versus backward looking measures, these measures are more often highly correlated. 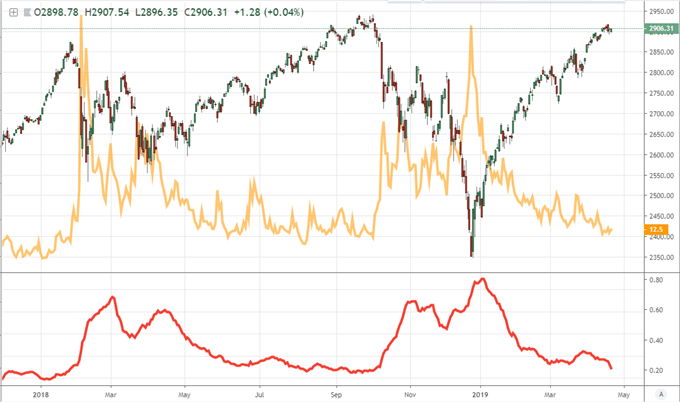 As we moved into April, we were witnessing a remarkable shift in market sentiment: the extreme volatility measures that resulted from an October to December plunge that almost pushed the US equity indices into ‘bear markets’ (a 20 percent correction from peak highs) had almost fully deflated. Activity in the financial system is natural mean reverting, meaning that it will find a normal level that is neither too high nor too low. Otherwise investors would leave and/or instability would draw in buffers both orthodox and unorthodox. However, the October-triggered move was the second such extreme charge in a year. The explosion in February 2018 was not that long ago even for a speculative market’s short attention span. In fact, that first episode marked transition from conditions that were unprecedented up until that point. Just how extreme are conditions compared to that period and what can we derive from that comparison?

As 2017 wore on, the global markets were in their 8th year of recovery from the Great Financial Crisis that devastated the world back in 2008. After that many years of climb, a sort of routine solidified in investor sentiment as potentially troubling fundamental developments were overlooked in preference for the status quo that benefit he vast majority of participants keen to the formula of ‘going long the market’ with an implicit dependency on momentum and external safeguards such as central bank support. With a wobble in late 2015 and early 2016 on the back of headlines surrounding China, confidence was recharged with a more specific focus on the US Presidential election whereby fiscal stimulus (infrastructure spending) was a universal call and tax reform was floated by the Republican base. Both would go over well with speculative intent.

In the aftermath of the election results, the markets seemed to be expectant of these growth-bearing promises and continued to promote their confidence through rising markets. Into the second half of 2017, the degree of confidence started to hit unprecedented levels. The climb from the likes of the S&P 500 – though the optimism was fairly universal – resulted in a where the 60-day ATR as a percentage of spot (equivalent of 3 trading months) hit its lowest level on record and we passed through an incredible 113 trading days (through January 30, 2018) without a 1 percent or greater daily decline. In turn, the VIX started to frequent a reading below 10, which up until that point was a very rare occasion. In 2017, that happened 54 times. 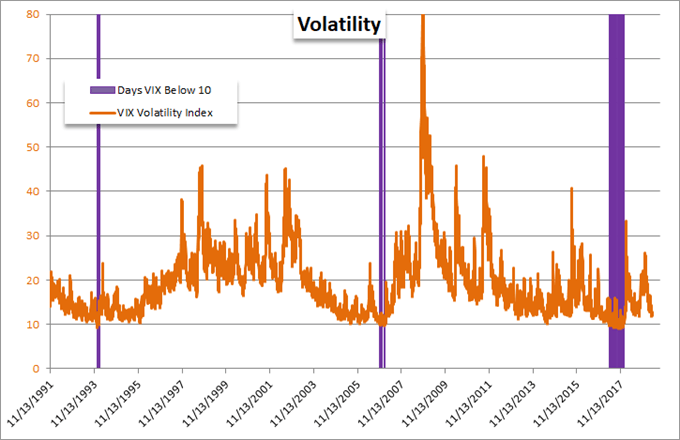 What we can learn from 2017 is that the measures of inactivity can grow more extreme than most would believe possible. The entire second half of the year was embodied by exultant complacency. It is possible that we experience yet another period of ‘drought’ where the belief of the status quo overpowers any new concerns that arise on the horizon, but there are certain disconnects to that history and now. One is the frequency of recent volatility that we experienced in February and October of last year. Another consideration is that there was an absence of prominent threats during the time and an easy attachment to a theme that could anchor even unrealistic expectations (a windfall from a political election). Nowadays, we are awash in risks from trade wars to Brexit to monetary policy limitations. While the quiet can stretch a further, it is unlikely to subsist as readily as it did two years ago.

Another historical reference point of extreme quiet across the global financial markets is the Summer of 2014. During that period, the recovery from the economic pain was five years in the past while external risks like the US sovereign credit downgrade were largely suppressed. What’s more, around this time, the external support in massive stimulus programs from the likes of the Federal Reserve, European Central Bank and Bank of Japan were either in place or being ‘threatened’ by the relevant authorities. With that kind of incredible combination of environment and exceptional inflow, it was little surprise that the perception of risk collapsed.

In terms of how speculative interests manifested themselves in this atmosphere, we saw much the same scenario as we did in 2017. The S&P 500 was in an incredibly consistent climb – though dotted with a few meaningful slips along the way. Implied volatility would also drop significantly across asset classes. It wasn’t until the August 2015 that we finally saw that confidence end in extreme fashion, but volatility did pick up well before then. Markets (ie the S&P 500) struggled to make new highs through the very end of 2014 and the first half of 2015. Eventually the catalyst would come along in the form of China to offer the ‘trigger’. 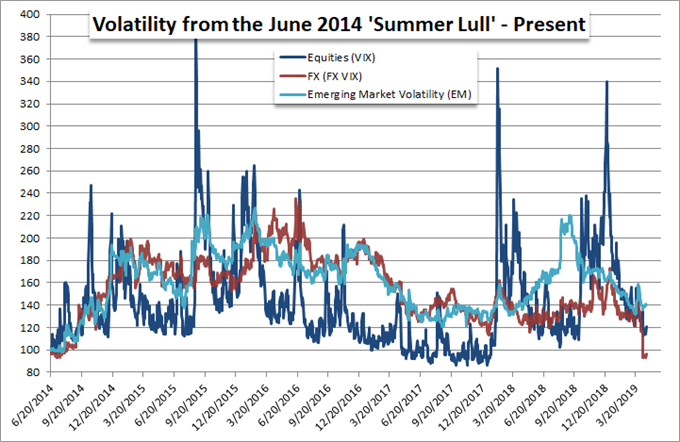 There are a few take-aways for our present condition from the ‘Summer Lull of 2014’. First, the slump in activity was far more universal. One of the more remarkable slumps in expected volatility was actually registered with the FX market rather than US equities – and that seems to once again be the case. With a benchmark to June 2014, we find that the currency implied measure has dropped to its lowest in five years, whereas equities are still higher relative to October 2018 levels. Perhaps the most remarkable, realized measure of inactivity at present can be found in the Dollar’s movements. The DXY Dollar Index has carved out its smallest range these past 40 weeks (relative to current spot level) that we have seen since that same Summer period in 2014. Before that reference point by the way, we only had one other period that was comparable back in 1996. 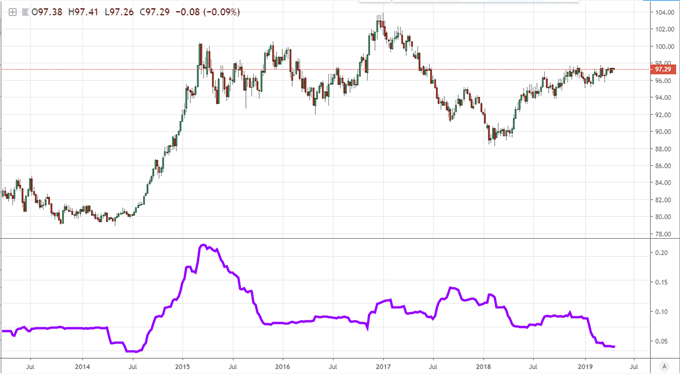 One element that could help extend the period of quiet is the typical seasonal ebb and flow of the markets. Historically, the Summer months (for the Northern Hemisphere where the vast majority of liquidity is executed) sees a drop in activity and volatility which subsequently supports the quiet advance of speculative assets. We can see the historical averages for the VIX below which sets nadir to these ‘doldrums’ around June, though April and May are severely deflated themselves. In part, liquidity plays a key role in this slump in volatility. On the other hand, thin markets can also amplify market shocks when they arise. 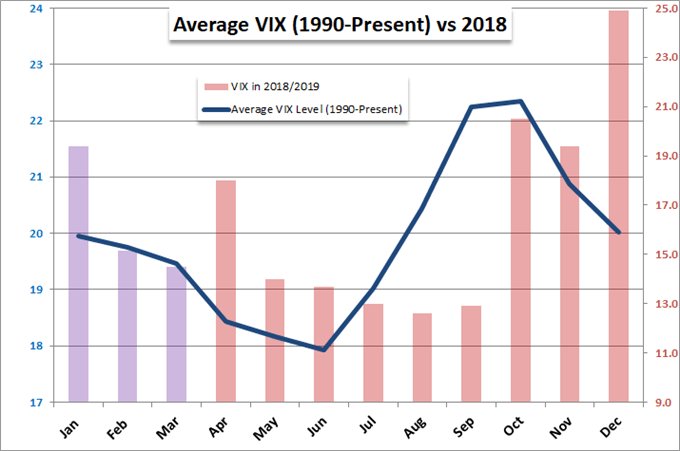 As we have seen from 2017 and 2014, extreme levels of low volatility – and the speculative reach it supports – can last longer than many believe possible. We are once again experiencing a broad drop in expected levels of volatility across asset classes and the ‘Summer’ seasonality effects are a strong justification for those looking for comfort. That said, a reversion to a ‘normal’ level of activity is inevitable. The crowd is more familiar with sudden changes in market weather given 2018 and there is a laundry list of fundamental issues that can serve as points of panic. In general, it is not wise to take on exceptional risk for very low levels of return. Remaining observant and responsive to conditions is very important.