– Overall, the Australian jobs market only has seen two months of contraction since October 2016.

– Retail tradersremain net-short AUDJPY, and have increased their net-short positions over the past week.s

Despite ongoing trade tensions between its largest trading partners, the Australian economy has continued to chug along, steadily adding jobs for eight consecutive months. If the Bloomberg News survey is correct, March will make it nine months in a row with positive jobs growth. Australian employment is due to have increased by 15K in March after adding 4.6K jobs in February. Overall, the Australian jobs market only has seen two months of contraction since October 2016.

With the unemployment rate set to hold at 5.1%, the Reserve Bank of Australia is simply looking for more evidence that the labor market remains a source of stability, particularly as wage growth remains weak and topline inflation pressures have only started to stabilize across developed economies. 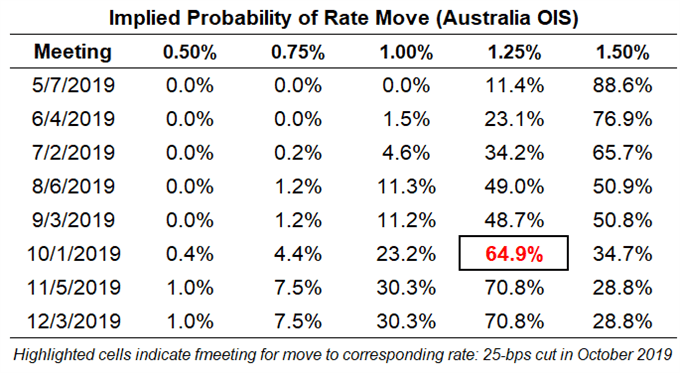 Like the Reserve Bank of New Zealand, the RBA is stuck in neutral when it comes to policy expectations for the first half of the year: according to overnight index swaps, there is only a 23.1% chance of a 25-bps rate cut in June; and there is a 64.9% chance of a 25-bps cut by December 2019. 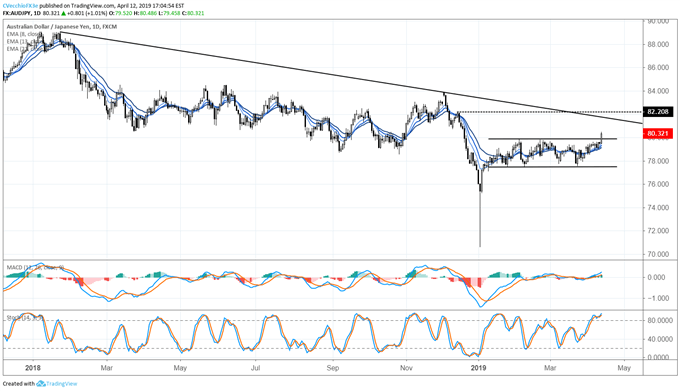 Following the Yen flash crash in January, AUDJPY prices have been consolidating in a sideways pattern, but may finally be breaking to the topside. The range between 77.50 and 79.85 has given way to a bullish breakout,with the range providing a measured move up to 82.20. Before 82.20, however, AUDJPY bulls may have to contend with the descending trendline from the 2018 swing highs, which come in closer to 81.65/90 over the coming week. 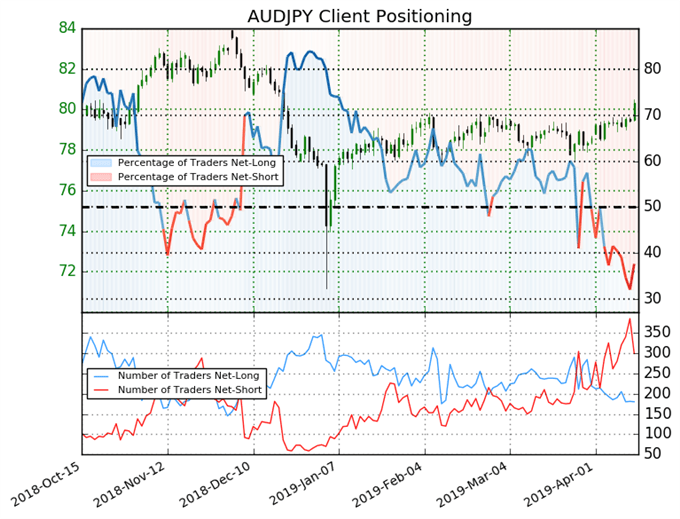 We typically take a contrarian view to crowd sentiment, and the fact traders are net-short suggests AUDJPY prices may continue to rise. Positioning is less net-short than yesterday but more net-short from last week. The combination of current sentiment and recent changes gives us a further mixed AUDJPY trading bias.