– Rates markets are currently pricing in a 0% chance of a rate move this coming week, but rates are leaning increasingly dovish as the calendar pushes forward through the year.

The Reserve Bank of New Zealand’s March meeting this week may come and go without anyone noticing much of anything along the policy front.

The backdrop of the Q4’18 New Zealand GDP report that was released on March 20, which showed growth in at 2.3% y/y, slightly lower than the 2.6% y/y rate seen in Q3’18, suggests a slowing economy – much in line with what’s been seen across the developed world. At 1.9% y/y, headline inflation in New Zealand currently sits just below the mid-range of the medium-term 1-3% target.

It should come as little surprise, then, that rates markets are pricing in a mere 0.5% chance of a move this week.

But the topline macro numbers may distract from the recent trend of improving New Zealand economic data, which has been quietly beating analysts’ expectations since mid-February. The Citi Economic Surprise Index for New Zealand hit a yearly low on February 7 at -45 but has since climbed to -7.5 by the end of the day on March 22. 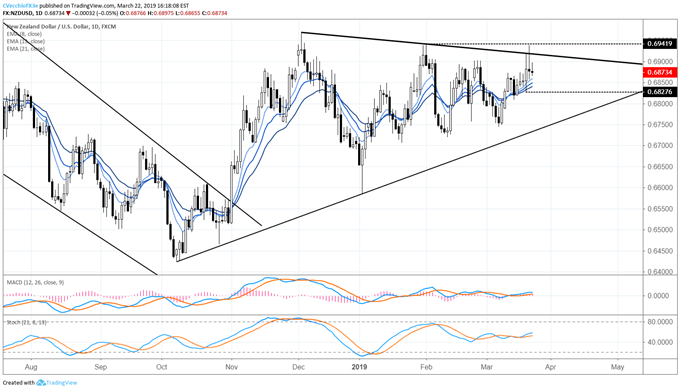 Since bottoming out of its 2018 downtrend in early-November, NZDUSD has been consolidating in an ever-tightening symmetrical triangle over the past several months. This past week, it appeared that a breakout to the topside may finally transpire following the bullish outside engulfing bar on March 20. However, a weekly close through the yearly swing highs from early-February at 0.6942 was never achieved, keeping the triangle intact for now.

Accordingly, given the neutral tone expected at the March RBNZ meeting this week, traders may want to keep an eye on the recent range around the March 20 daily candle and the yearly swing high: a break above 0.6942 would suggest that more topside gains are due; whereas a break of the March 20 bullish outside engulfing bar low at 0.6827 would increase the odds of a return to the March lows at 0.6745. 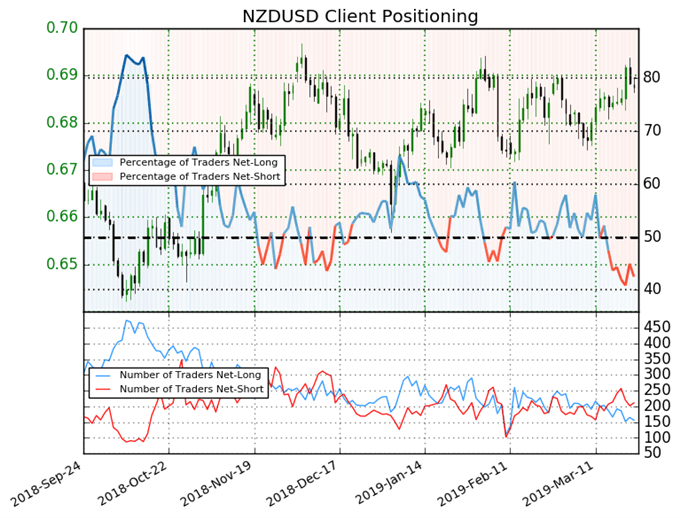 We typically take a contrarian view to crowd sentiment, and the fact traders are net-short suggests NZDUSD prices may continue to rise. Positioning is less net-short than yesterday but more net-short from last week. The combination of current sentiment and recent changes gives us a further mixed NZDUSD trading bias.