– With the Brexit deadline having been punted to October 31, it’s possible that the British Pound proves more sensitive to economic data in the meanwhile once more.

– Retail traders have increased their net-short GBPJPY positions over the past week.

Rebounding energy prices over the past several months have seen inflation readings across the developed world stabilize at the start of 2019; the UK Consumer Price Index should be no different. The upcoming March UK inflation report is due to show headline inflation due in at +2.0% from +1.9% (y/y), while the monthly reading is due in a 0.2% from 0.5%. Core CPI is expected to have increased to 1.9% from 1.8% (y/y).

While the Bank of England’s Monetary Policy Committee has repeatedly made clear that the lack of clarity over Brexit would give pause to any change in policy, thereby neutralizing the impact of economic data, with the Brexit deadline having been punted to October 31, it’s possible that the British Pound proves more sensitive to economic data in the meanwhile once more. 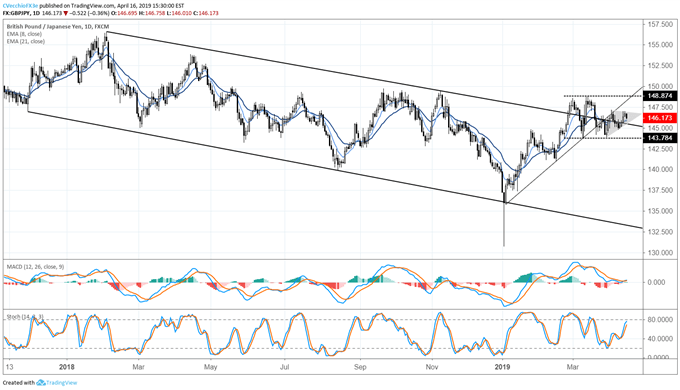 Since February 22, GBPJPY prices have traded in a range between 143.78 and 148.87. From one point of view, this means the cross provides little opportunity. From another point of view, the recent consolidation in GBPJPY price action may be akin to a coiling spring storing potential energy; the release of the kinetic energy, i.e. the breakout from the range, is worth waiting for.

Before a move towards either range resistance or support is achieved, price will need to leave the triangle that’s formed between the March 29 low and April 3 high. To this end, if GBPJPY price breaks above the April 12 high of 147.02, odds would increase for a retest of the broader range higher at 148.87.

On the other hand, if GBPJPY price falls below triangle support at 145.55/60 over the coming days, then the probability of a move back towards the broader range low at 143.78 would go up. 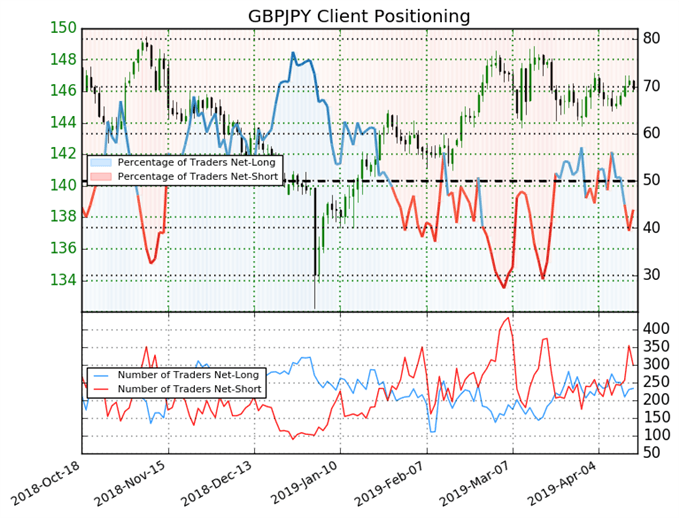 We typically take a contrarian view to crowd sentiment, and the fact traders are net-short suggests GBPJPY prices may continue to rise. Positioning is less net-short than yesterday but more net-short from last week. The combination of current sentiment and recent changes gives us a further mixed GBPJPY trading bias.