– At the March Fed meeting, policy officials cited an uncertain growth environment as a reason to push back expectations for a rate hike in 2019.

– Retail traders are net-short USDJPY but recent changes give us a bullish USDJPY trading bias.

The Federal Reserve meets on Wednesday for its May meeting, and both economic and market conditions couldn’t be more different than when the FOMC last met. In March, concerns were running rampant that the US government shutdown was going to have a significant negative impact on Q1’19 US GDP, which at this point in time, we know was overblown: 3.2% annualized growth was reported last week.

Similarly, with the US jobs market still strong – the unemployment rate is at 3.8% while wage growth is 3.2% y/y – there is a possibility that the FOMC comes out with a more hawkish tone than what was previously deployed. If so, rates markets are potentially leaning too dovish ahead of Wednesday. 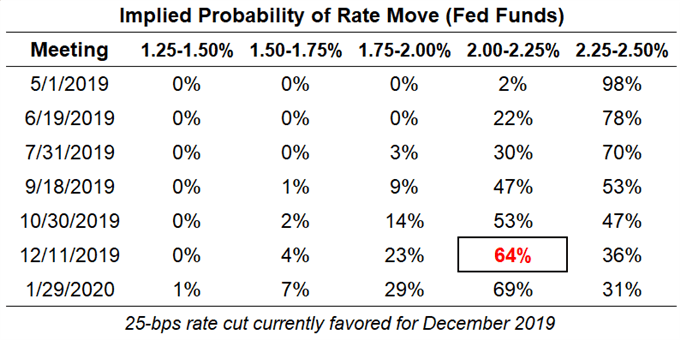 Ahead of the May Fed meeting, rates markets are expecting rates to stay on hold through the first half of the year; however, by October, rates markets begin to favor a rate cut. Given that the Federal Reserve typically changes policies at meetings with a new Summary of Economic Projections, we interpret the above table to mean that a 25-bps rate cut is currently favored for December 2019. 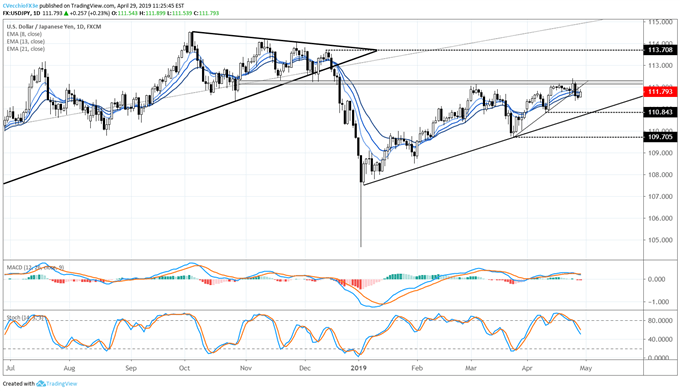 USDJPY prices may have lost the uptrend from the March and April swing lows by the end of last week, but that doesn’t mean that bulls are ready to throw in the towel just yet. And, if the May Fed meeting is going to produce a relatively more hawkish tone, USDJPY may still have room to run higher.

As has been the case since early-March, USDJPY once again failed to close back above the 112.15/30 resistance zone, formerly support through November and December 2018. A move through this area would open the possibility for a return back to the December 2018 swing high near 113.70.

If USDJPY prices are to resolve themselves to the downside, the first level to clear out is the April swing low at 110.84, which would also constitute a break of the uptrend from the post-Yen flash crash low in January. 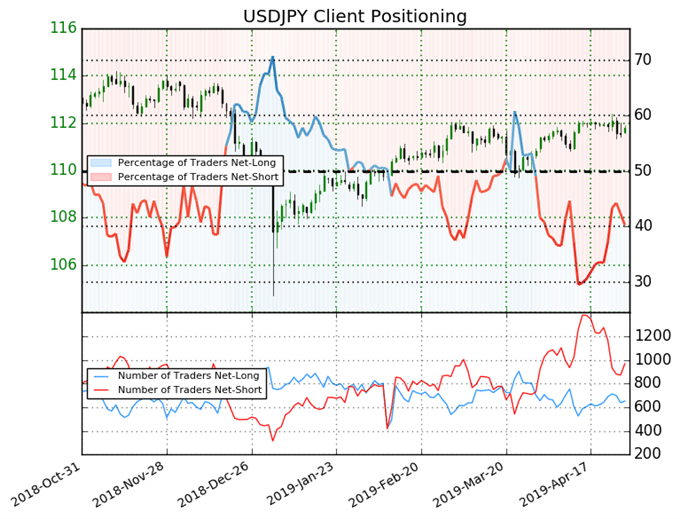 We typically take a contrarian view to crowd sentiment, and the fact traders are net-short suggests USDJPY prices may continue to rise. Traders are further net-short than yesterday and last week, and the combination of current sentiment and recent changes gives us a stronger USDJPY-bullish contrarian trading bias.