– NZDUSD prices reached fresh 2019 lows at the end of April, breaking the January 3 flash crash low in the process.

– Retail traders are currently net-long NZDUSD and have remained net-long since April 2; during that timeframe, NZDUSD prices fell by -3%.

The Reserve Bank of New Zealand’s overnight cash rate peaked at 3.50% in May 2015 and has been on a slow erosion over since; the most recent 25-bps rate cut was at the November 2016 meeting. Mounting concerns about a soft economy may have reached the tipping point in recent weeks, finally provoking the Reserve Bank of New Zealand into its first rate move in two and a half years.

The Q1’19 New Zealand GDP report showed that growth was weaker than anticipated, coming in at 2.3% annualized versus 2.5% expected, from 2.6% in Q4’18. Meanwhile, the Q1’19 New Zealand inflation report produced a similar disappointment, registering 1.5% versus 1.7% expected, from 1.9% (y/y). Overall, the Citi Economic Surprise Index for New Zealand, a gauge of economic data momentum, has fallen from -1.8 to -11.2 since the March RBNZ meeting.

But after the Reserve Bank of Australia opted to keep rates on hold rather than go the cut route, traders have taken a different perspective on the RBNZ. In the wake of the RBA’s decision to punt its rate decision until June, traders are leaning into the same fate for the RBNZ: overnight index swaps now foresee a 36% chance of a rate cut at the May RBNZ meeting. 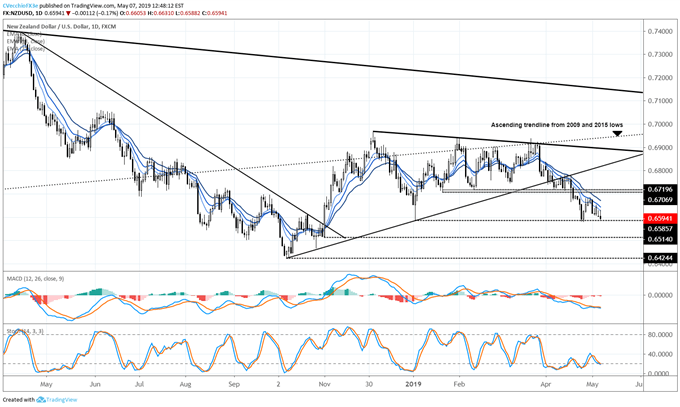 The near-term price forecast for NZDUSD remains bearish as technical studies point to a weak momentum environment. Price remains below its daily 8-, 13-, and 21-EMA envelope, while both daily MACD and Slow Stochastics point lower in bearish territory. 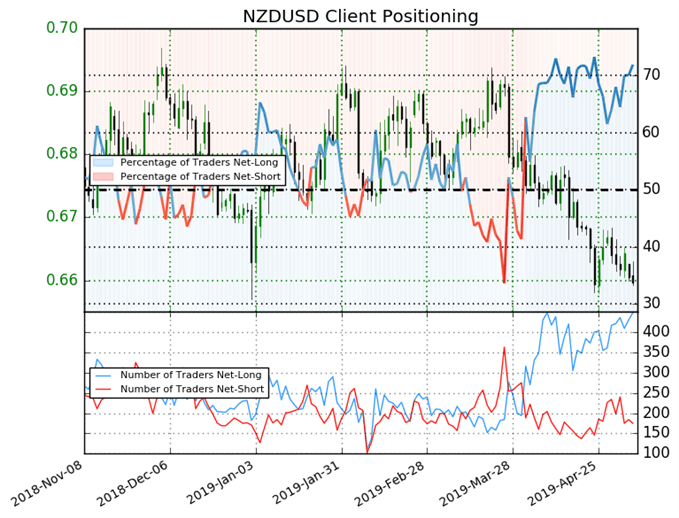