AUD/USD struggles to hold its ground following the Reserve Bank of Australia (RBA) meeting as the central bank insists that ‘the low level of interest rates is continuing to support the Australian economy,’ and recent price action raises the risk for a further decline in the exchange rate as it threatens the range-bound price action from the previous week.

Recent comments from the RBA suggest the central bank will continue to endorse a wait-and-see approach at the next meeting on May 7 as ‘higher levels of spending on public infrastructure and an upswing in private investmentare supporting the growth outlook,’ and fresh developments coming out of Australia may do little to prop up AUD/USD as Retail Sales are projected to increase 0.3% in February, while the Trade Balance surplus is expected to narrow to A$3700M from A$4549M in January.

A batch of mixed data prints may produce headwinds for the Australian dollar as it puts pressure on the RBA to further insulate the economy, and Governor Philip Lowe & Co. may continue to change their tune over the coming months as ‘growth in household consumption is being affected by the protracted period of weakness in real household disposable income and the adjustment in housing markets.’

The RBA may show a greater willingness to cut the official cash rate (OCR) to a fresh record-low especially as the U.S. and China, Australia’s largest trading partner, still struggle to reach a trade deal, and the central bank may respond to the weakening outlook for the world economy as ‘growth in international trade has declined and investment intentions have softened in a number of countries.’

With that said, AUD/USD may continue to track the downward trend carried over from late-2018 as the RBA gradually alters the forward-guidance for monetary policy, with recent price action raising the risk for a further depreciation in the exchange rate as it threatens the range-bound price action from the previous week. Sign up and join DailyFX Currency Analyst David Song LIVE for an opportunity to discuss potential trade setups. 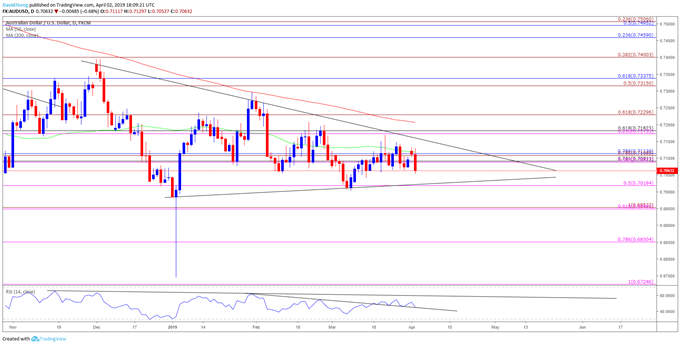