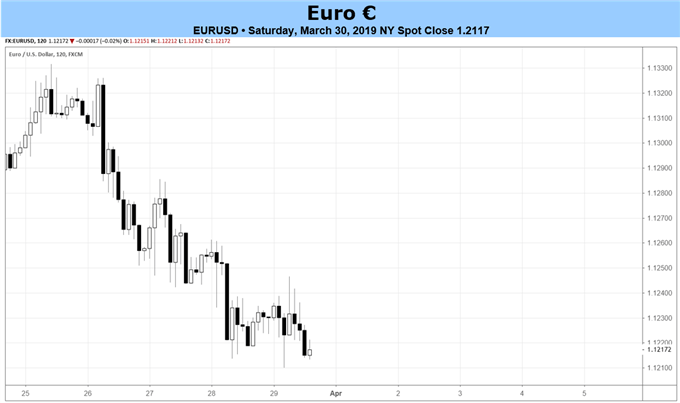 – The ‘Easter Effect’ may be present in the forthcoming Eurozone inflation report, given the calendar discrepancy over the past year (Easter was on April 1, 2018; will be on April 21, 2019).

– The IG Client Sentiment Indexshows that retail traders are buying EURUSD dips – a contrarian signal that more losses may be yet to come.

The latest Brexit news are weighing on all the European currencies, not just the British Pound, and that negative sentiment was certainly reflected in Euro rates over the past week. For EURGBP (+0.58%), the missed original March 29 Brexit deadline has boosted speculation that UK Prime Minister Theresa May could be at the end of her time in office; both EURCHF (-0.59%) and EURUSD (-0.75%) reacted in line with what ‘safe havens’ would be expected to do when uncertainty rises.

Elsewhere, there was little strength the Euro could muster on its own, for every other EUR-cross’ could be explained by exogenous factors: for EURCAD, it was the better than expected January Canadian GDP report; for EURNZD (+0.35%), it was a further repricing of RBNZ rate expectations following the March meeting; and for EURJPY (+0.11%), it was global equity markets running higher.

The Eurozone economic calendar for the coming week is once ‘barbell’ shaped: heavy on the front and back ends, thin in the middle. Traders will want to pay attention to data due out on Monday and Thursday, with little practical need to pay attention to any other European data release in between.

The preliminary March Eurozone Consumer Price Index on Monday may be impacted by the ‘Easter Effect’ due to the timing of the holiday this year (April 21) relative to last (April 1). Otherwise, the bump in Brent Oil prices over the past month (+5.1%) should filter through and help prove supportive to price pressures. The Bloomberg News forecast calls for headline CPI to come in at 1.5% and core CPI in at 1%; given the context, misses would be extremely disappointing. 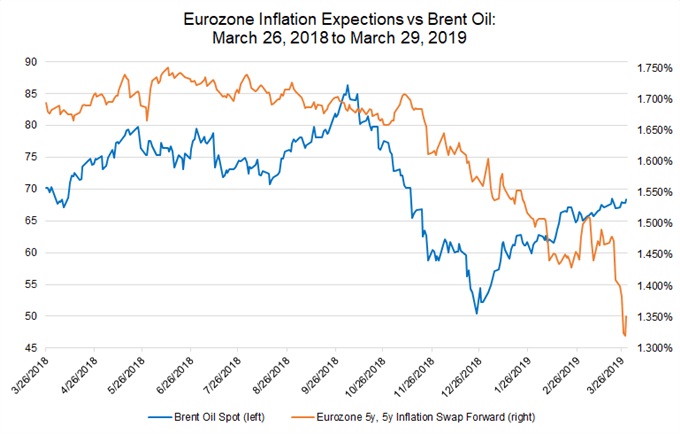 Stability in energy prices have seemingly done little to filter through into inflation expectations (Brent Oil prices up by +5.1% over the past four-weeks), a strong indication that growth concerns are driving the turn lower. ECB President Mario Draghi’s preferred measure of inflation, the 5-year, 5-year inflation swap forwards, closed last week at 1.351%, sharply lower from where it was one month earlier at 1.499% (-14.8-bps).

The March ECB meeting minutes on Thursday will draw interest this week considering the Governing Council’s decision to announce its third TLTRO program starting this September and push back its forward guidance to indicate that rates would stay on hold through at least the end of 2019. Likewise, we’ll get some insight into how much more the central bank is willing to do at a time when fiscal policymakers are hamstrung by seemingly endless domestic woes.

An objective look at European economic data shows that conditions have stabilized, relatively speaking, over the past few weeks. In recent days we’ve seen the March German IFO surveys and February German Retail Sales beat expectations, while Eurozone economic, industrial, and services confidence all dropped in March. As a result, heading into the coming week, the Citi Economic Surprise Index for the Eurozone has moved up to -61 from -61.6 one week earlier; for comparison, three months earlier, the index was at -73.3.

EURGBP to Stay at Center of Attention

Over the course of the week, the Brexit negotiations in UK parliament will hold considerable sway over EURGBP, and as a result, still on the broader EUR-complex. Our heuristic still holds that good Brexit news means EURGBP likely depreciates; when GBP leads EUR, other EUR-crosses have tended to outperform. And vice-versa: bad Brexit news means EURGBP likely appreciates; when EUR leads GBP, other EUR-crosses have tended to underperform.

UK PM May could try and push her EU-UK Withdrawal Agreement through UK parliament for a fourth time, and if she succeeds, then a May 22 deadline would emerge for Brexit. If not, the April 12 deadline remains (“the new March 29”). It’s possible she calls for a General Election as no path forward emerges. But to be clear: the European Union will not be the entity to push the UK out the door; they will keep offering extensions and even allow the UK to participate in European parliamentary elections.

The first week of a new month and a new quarter typically brings the usual smattering of important economic data releases and events, and the first week of April and Q2’19 is no different. Whereas the important Eurozone data is due out on Monday and Thursday, the top events from elsewhere in the FX world come on Tuesday and Friday, in the forms of the March Reserve Bank of Australia meeting and the March US Nonfarm Payrolls report, respectively.

For EURAUD, odds are low that the RBA takes any action at all, with only a 7% chance of a 25-bps rate cut this week. But traders should be on the watch for any significant shift in tone, in line with the dovish shift seen by the RBNZ last week. Rate cut odds are building for later this year, with overnight index swaps now pricing in a 54% chance of a cut at the July meeting.

For EURUSD, the March US labor report represents another opportunity for the US economy to prove that early Q1’19 economic malaise has been overcome. After all, right around the time we got the putrid February US Nonfarm Payrolls report that showed that the economy only added 75K jobs, the Atlanta Fed GDPNow growth tracker for Q1’19 was near a mere 0.2%. Yet now, with the headline March US jobs report due to show gains of +180K and the Atlanta Fed GDPNow growth tracker up at 1.7%, traders may be less inclined to be so aggressively dovish on the Fed this year (Fed funds pricing in a 25-bps rate cut at the September 2019 meeting). 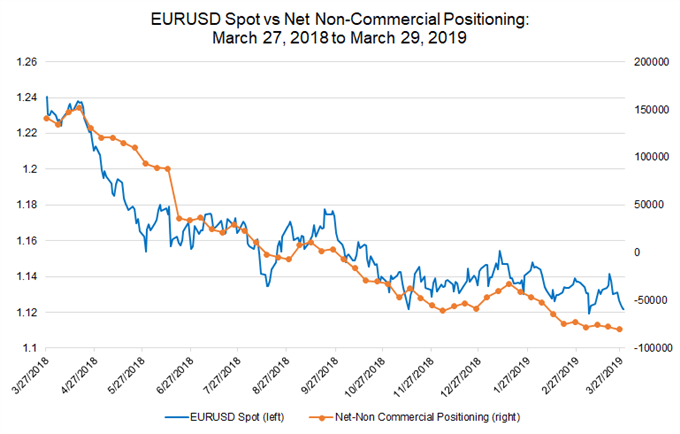 Finally, looking at positioning, according to the CFTC’s COT for the week ended March 26, speculators increased their net-short Euro positions to 80.3K contracts, down from the 77.7K net-short contracts held in the week prior. The largest net-short position since December 13, 2016. It’s not difficult to envision the significant short position in the futures market playing a role in any major price developments around the latest Brexit news.