The New Zealand Dollar was knocked Thursday by yet another weak business confidence reading which, while hardly news in itself, may now have more bearing on the path of domestic interest rates.

The March confidence outlook from the Australia and New Zealand Bank came in at -38, well below February’s -30.9. The activity outlook slipped to 6.3 from 10.5. Weakness in this release is sadly nothing new. Confidence has been in negative territory since late 2017.

ANZ said that the economy is quietly losing steam, with firms increasingly wary. It also suspected that the ‘hard’ official economic numbers could start to wilt further too.

Given that gloomy read it’s hardly surprising that NZD/USD should have slipped. 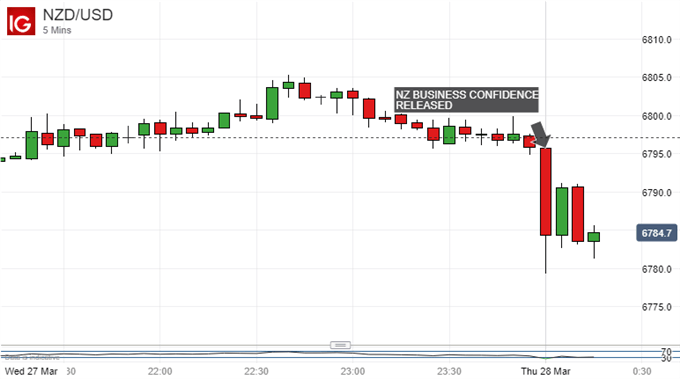 The effect of weak data may be magnified following commentary from the Reserve Bank of New Zealand after it opted to keep interest rates on hold at record lows Wednesday. The RBNZ noted a shift in economic risks to the downside, leaving lower rates as an implicit likelihood. The central bank had previously been more balanced in its prognosis.

That shift had already hit the Kiwi hard this week, taking it below its former, resilient uptrend. 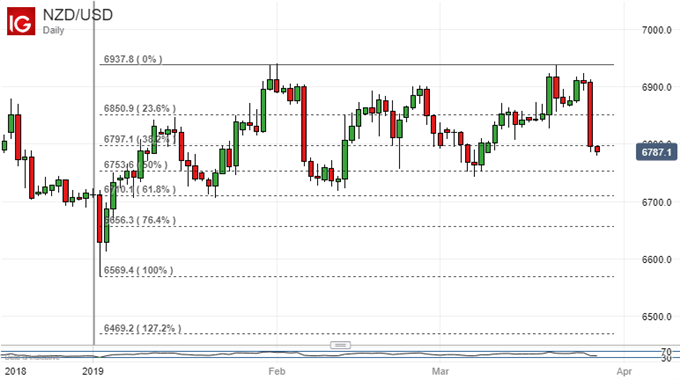 It’s now possible that domestic economic numbers will have a lot more impact on the currency, especially if they are seen to confirm the RBNZ’s darker suspicions.

Technically speaking the pair is flirting with the second, 38.2% Fibonacci retracement of its 2019 rise. That comes in at 0.6797 and seems to be giving way under concerted bear pressure. Failure here will probably put focus on the 0.6750 area which marks the last significant low, made earlier this month. It also coincides neatly with the 50% retracement.