The New Zealand Dollar plunged following the release of New Zealand CPI data after reports showed a 1.5 percent pickup, missing the 1.7 percent estimate. Overall, New Zealand’s economic activity has been struggling to gain momentum against the backdrop of waning global demand. Since January, according to the Citi Economic Surprise Index, New Zealand’s economy has been underperforming relative to expectations. 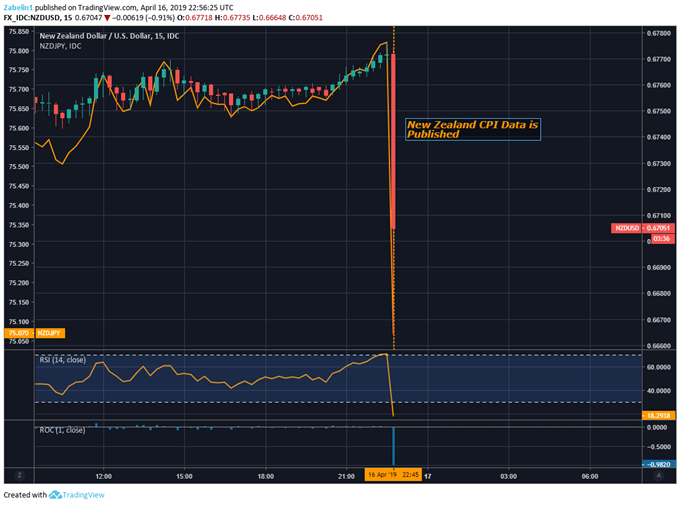 Overnight index swaps are pricing in a 62% probability of a rate cut by the Reserve Bank of New Zealand (RBNZ) by the September meeting. This follows last month’s decision to hold the benchmark rate at 1.75 percent. This was accompanied by commentary by RBNZ Governor Adrian Orr that struck dovish tones as he elaborated on risks to the economic outlook shifting to the downside.

Looking ahead, the New Zealand Dollar will be closely watching the upcoming cascade of Chinese economic data, most notably the first quarter GDP figure. Since the eruption of the US-China trade war, the global growth outlook has deteriorated, weighing on the cycle-sensitive New Zealand Dollar. Furthermore, growing fears over slower global growth will likely continue to drive a dovish shift in RBNZ policy expectations.