The Nikkei 225 remains very much within the impressive uptrend which has dominated this year’s trade. However recent progress has been patchy.

Things don’t look all that serious for the bulls as yet, admittedly. The Tokyo blue-chip benchmark is still towards the top of the upward daily-chart channel which has bounded trade since February 8 and which in any case is only an extension of the rise from this year’s January lows. 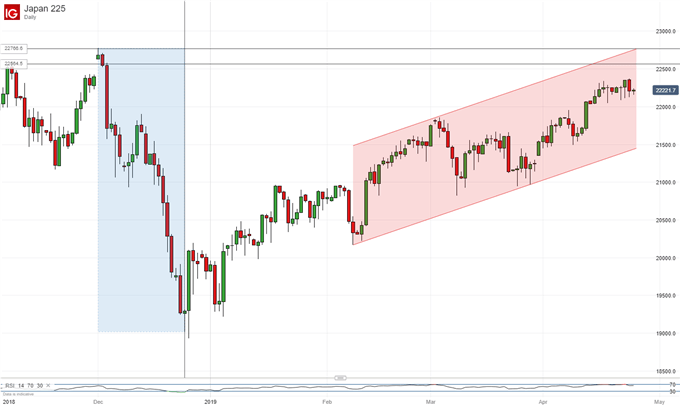 Still, the trading range has narrowed notably since mid-April and the Nikkei is showing some signs of topping out around current levels, at least temporarily. It’s worth noting too that the Japanese market will face a string of holiday-related closures between April 29 and May 6, the approach of which may well see liquidity diminished and moves exaggerated.

There may also be some nearer-term risk on Thursday as the Bank of Japan will give its April monetary policy decision later in the day. While the most obvious policy settings seem unlikely to change the BoJ did indulge in some low-key de facto tightening last week when it reduced its monthly asset-purchase target. Markets will be on watch for any more of this, and it could hit stock prices.

For all that the Nikkei looks quite comfortable close to its 2019 highs, with no obvious profit-taking impulse apparent. This sign of enduring demand might suggest that any slides we see over the next couple of weeks might well represent better buying opportunities.

In any case the bulls’ next order of business must be to retake the resistance zone between 22,564.5 and 22.766.6. This is where the steep fall of early December began and a durable spell of consolidation at or above this level might well carry bullish psychological resonance. More than 80% of that fall has already been doggedly clawed back.

However, with so much possible market disruption looming, a solid rise above that level may take a bit of time, and it might be advisable to be wary of any early attempts.

Setbacks will probably find initial support in the 21,830 area around which trade concentrated in early April, just before the current leg higher. Below that is the first Fibonacci retracement of this year’s rise, at 21,614.8. That is likely to hold but, if it doesn’t we may well see the whole channel broken to the downside. That would be an obviously more bearish signal for the index, and I don’t expect to see it. Some consolidation and a further onward push seems the most likely scenario, but gains may have to await the end of Japan’s long holiday period.