The Nikkei 225 has staged a modest fightback from its recent lows but the fight seems to be fading short of the key resistance which will need to break to make it stick.

Fundamentally speaking the rally was rooted in the global stock bounce which followed the implication that US interest rates could go lower if needed to counter the gloomy effects of trade conflict on the indexes. Still, those effects are very much in play. 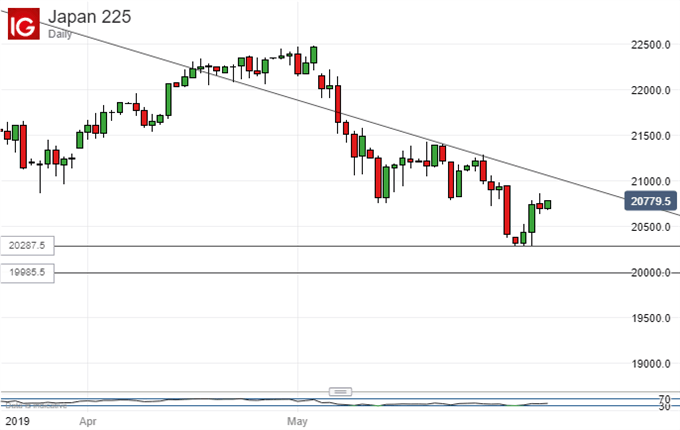 Technically speaking there’s a clear short-term downtrend line on the daily chart, nicely confirmed by recent peaks. The bulls will need to break that convincingly and hold above it if the rally is to be anything more than a bump in the road a lower and, so far, that looks like being a tall order. That line currently provides resistance around 21,000. That’s more than 200 points above the current market and the bulls will need to show some fight to even get there.

A good psychological start might be to top 20,952.6. That seems a more realistic target and getting there would mean that the Nikkei had clawed back all the losses incurred during the sharp falls of last Friday. A quick foray back up to this level might well indicate that there remains some near-term upside momentum.

However, while not impossible, such a move doesn’t look likely from the chart and, indeed a test lower now seems more probable. That would put focus on support at the recent low of 20,287.5 and, probably reopen the broad support zone between that and January’s cluster of trading action around the 19,985 region.

Momentum indicators don’t suggest that that zone is in imminent danger of being broken anytime soon, but a retest of its upper regions seems the most likely prospect now, one which would incidentally confirm that another lower low had been made on the daily chart.