Asia Pacific equities traded mixed on Friday, with the worst-performing indexes in Japan. The Nikkei 225 dropped about 0.8% before Tokyo close, lead lower by automotive shares. Mazda Motor Corp was down over 6% as it flirted with closing at its lowest since 2013.

Subpar performance there may have stemmed from the US threatening to raise tariffs on all Mexican imports. The risk of higher prices from North America could bode ill for Japanese carmakers such as Honda too, the nation imports vehicles from the region to sell domestically.

Things were looking slightly better off in China and in Australia, where their benchmark indexes, the Shanghai Composite and ASX 200 respectively, traded relatively flat. South Korea’s KOSPI fared slightly better, climbing about 0.2%.

S&P 500 futures are pointing notably lower, hinting that risk aversion may prevail in the remaining 24 hours. In fact, the index appears to be facing a similar scenario as during the panic selloff from Q4 2018. It could take a rate cut from the Fed to stem declines.

US-China talks appeared to have stalled, with Beijing looking to potentially curb sales of rare-earth minerals to the United States. Meanwhile, Trump’s threat of levies on Mexican products casts uncertainty over the ramification of the USMCA.

Given the Fed’s data-dependent approach, all eyes are on US core PCE to gauge inflationary pressures. At 12:30 GMT, this data, which is the Fed’s preferred measure of inflation, will cross the wires. A softer-than-expected outcome may fuel rate cut bets, perhaps cooling risk aversion.

Taking a closer look at Nikkei 225 futures to show afterhours trade, the index sits right on top of key support at 20680. If broken, this may open the door to extending the near-term downtrend. However, positive RSI divergence warns of fading downside momentum. 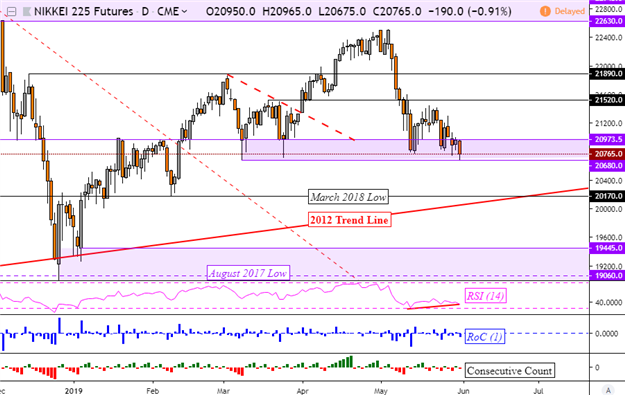