The Norwegian Krone rallied after the Norges Bank (NB) raised its benchmark interest rate from 0.75-1.00 percent, as anticipated. However, a surprise was delivered by policymakers who struck an unexpectedly hawkish tone, promptly sending the Krone higher. NB Governor Oeystein Olsen stated in a press conference that the central bank will likely raise rates once again in June. 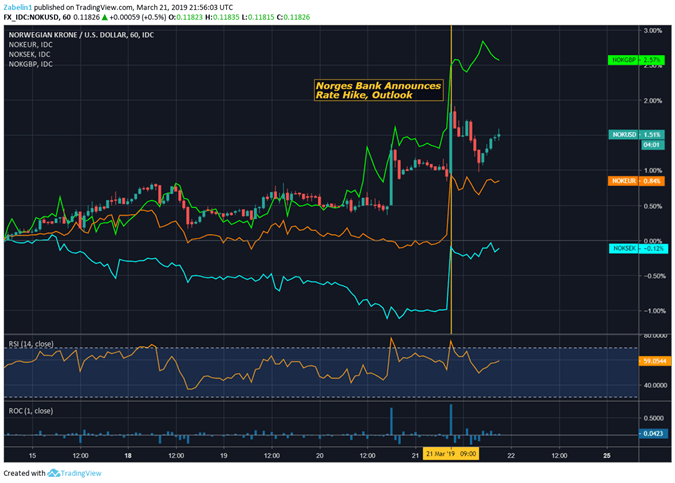 Note: Conventional quoting is inversed to what is seen above. This was done to illustrate the Krone’s jump.

He also said the outlook points to a gradual rate increases as a result of the good growth prospects in Norway and estimates that a neutral policy rate will hover around two percent. However, a concern he cited is slower growth in key trading partners – such as the EU – could put a dent in Norwegian exports and negatively impact GDP.

Despite fundamental headwinds, Norway’s economy has been outperforming relative to economists’ expectations since early January and has displayed remarkable resilience. Some of these themes include fears over trade wars and a general deceleration in major world economies e.g. China, Europe and the US. This was somewhat surprising given that Norway’s economy is so reliant on the petroleum sector as the “growth engine for the Norwegian economy”.

As a sentiment-linked commodity, changes in global demand are frequently reflected in shifts in crude oil prices that are then often mirrored in the performance of Norwegian assets like the Krone and the OBX. This might explain why as crude oil prices recovered, economic performance in Norway improved along with a general rise in the equity and Krona-weighted indices.

Looking ahead, signs of deteriorating or improving global economic performance will be a particularly important trend for Norwegian policymakers to watch. If the outlook is sufficiently soured, it could push the rate hike schedule back as officials re-align their monetary policy to fit the prevailing economic circumstances.