The pro-risk New Zealand Dollar outperformed against its major counterparts on Thursday, even by a greater extent than its similarly-behaving Australian Dollar cousin. Most of its gains occurred in the lead-up to Wall Street market open where an hour before, mixed US economic data crossed the wires. Most notably, initial jobless claims unexpectedly rose 230k this past week versus 200k expected and 193k prior.

That was the largest increase (+19.2%) since September 2017 which ended 5 weeks of consecutive smaller filings for unemployment aid. This seemed to overshadow an uptick in durable goods orders which preliminary estimates point to a 2.7% gain in March from -1.1% in April (see calendar below). At the time of the announcement, the S&P 500, US Dollar and local front-end government bond yields declined.

*All times listed in GMT

Taking a closer look at NZD/USD reveals that its best day in over a month (+0.49%) occurred right on support at 0.6592 on the chart below. This puts a pause in its recent declines within a descending channel going back to late March. As such, technical signals may point to a retest of channel ceiling as the next move. A daily close above 0.6706 (resistance) may confirm a longer-lasting reversal. 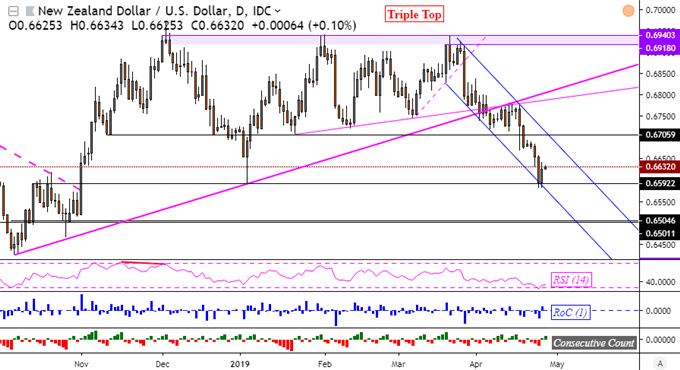 The anti-risk Japanese Yen also outperformed, gaining throughout the day. Traders may be unwinding carry positions ahead of the Golden Week holiday where local markets will be closed through May 6. It was an overall mixed day for equities. There was a divergence between the S&P 500 (-0.04%) and the Dow Jones Industrial Average (-0.51%).

Looking at the chart below, this may have been due to a dismal earnings report from 3M Company which is an industrial conglomerate. In fact, industrials weighed heavily against both indexes. In addition to cutting 2019 forecasts, 3M announced that it is expecting to trim 2,000 positions across the world. Shares dropped almost 13 percent in the worst performance since 1987. 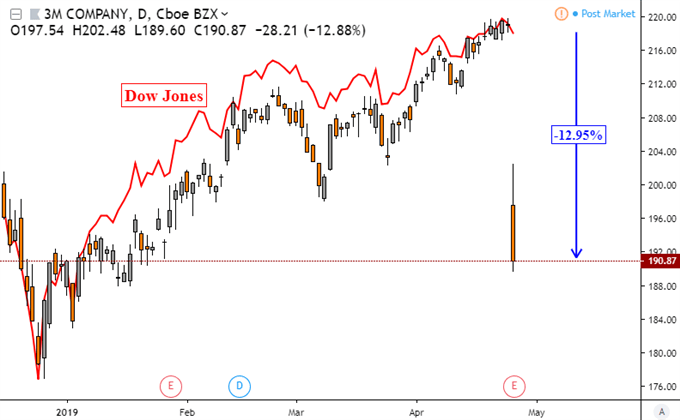 S&P 500 futures are pointing lower heading into Friday’s Asia Pacific trading session, hinting of a pessimistic trading environment that may be in store ahead. This may continue bolstering the Japanese Yen. The New Zealand Dollar may weaken on the other hand. Through NZD/USD got a boost after RBNZ Governor Adrian Orr noted that he isn’t worried by slower GDP numbers.