The Reserve Bank of New Zealand’s (RBNZ) meeting may shake up the near-term outlook for NZD/USD as the central bank shows little to no interest in altering the outlook for monetary policy.

Unlike its major counterparts, the RBNZ may stick to the same script and merely reiterate its pledge that the official cash rate (OCR) will be ‘at an expansionary level for a considerable period to contribute to maximising sustainable employment, and maintaining low and stable inflation.’ With that said, little to no changes in the forward-guidance for monetary policy may spark a bullish reaction in the New Zealand dollar as it curbs speculation for an RBNZ rate-cut.

However, the RBNZ may respond to the slowdown in global growth as the Governor Adrian Orr and Co argue that ‘the direction of our next OCR move could be up or down,’ and a batch of dovish comments may drag on the New Zealand dollar especially if the central bank shows a greater willingness to further support the economy. Sign up and join DailyFX Currency Analyst David Song LIVE for an opportunity to discuss potential trade setups.

As expected, the Reserve Bank of New Zealand (RBNZ) kept the official cash rate (OCR) at the record-low of 1.75% in February, with the central bank largely endorsing a wait-and-see approach for monetary policy as officials ‘expect to keep the OCR at this level through 2019 and 2020.’ The RBNZ went onto say that ‘there are upside and downside risks’ surrounding the economic outlook amid the slowdown in global growth, but it seems as though Governor Adrian Orr and Co. are in no rush to alter the monetary policy outlook as the central bank expects ‘low interest rates and government spending to support a pick-up in New Zealand’s GDP growth over 2019.’

The New Zealand dollar gained ground as the RBNZ stuck to the same script, but the move above the 0.6800 handle was short-lived, with the exchange rate closing the day at 0.6796. Learn more with the DailyFX Advanced Guide for Trading the News. 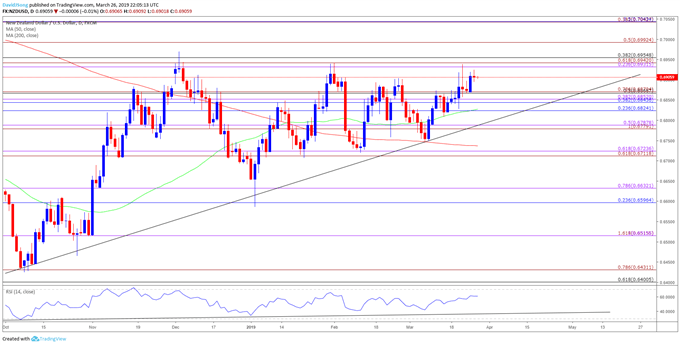