The NZDUSD price has broken to the downside from an ascending triangle pattern on the daily chart, suggesting further losses to come. As the chart below shows, the pattern has been in place since early December 2018, with the breakout occurring late last month. In the last few sessions the price seems to have stabilized but further losses from here would be no surprise.

The key levels to watch out for now are the low at 0.6719 touched on April 5, with a drop below leading potentially to a fall to under 0.67, where the support line of the new downward channel checks in. To the upside, the April 2/3/4 highs at 0.68 should provide resistance. Beyond that there is further resistance at the 20-day moving average at 0.6815 and the 50 dma at 0.6823.

The 0.68 level is the key upside level to watch, not just because the early April highs were there but also because the resistance line of the new downward channel checks in there, as does the 100 dma.

At DailyFX, we typically take a contrarian view to crowd sentiment, and the fact traders are net-long suggests the NZDUSD price may continue to fall. Traders are further net-long than yesterday and last week, and the combination of current sentiment and recent changes gives us a stronger NZDUSD-bearish contrarian trading bias. 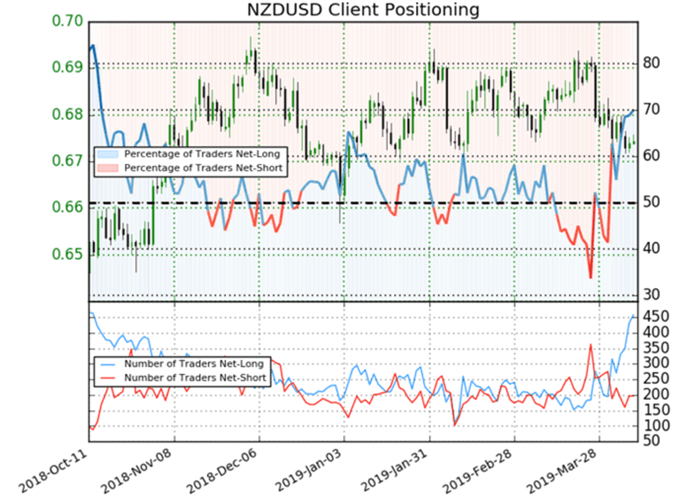 If you’d like to learn more about how to identify trends using trader sentiment data, listen in to my webinar tomorrow at 1130 GMT. You can sign up here

More resources to help you trade the forex markets: