In a puzzling turn of events, the New Zealand Dollar unexpectedly appreciated against its major counterparts despite a lackluster GDP report. In the fourth quarter of 2018, New Zealand’s economy grew only 2.3% y/y versus 2.5% expected and from 2.6% in the third quarter. This was the weakest pace of economic expansion since the fourth quarter of 2013.

Markets may have been paying more attention to the quarter-on-quarter 0.6% result. This was in line with expectations and more importantly up from 0.3% prior. That previous outcome was the softest pace of growth since Q4 2013 as well. More importantly, it was a step away from a contraction. In the current world economic environment, every major central bank has highlighted the concerns of weakening global growth.

Most recently was the Fed which just hours earlier downgraded economic projections and delivered increasingly more dovish rhetoric. While New Zealand may have also slowed to a certain extent, the q/q GDP statistics revealed that the situation could have been a lot worse. And on that surprising result, NZD/USD resumed its rally after losing upside momentum in the aftermath of the FOMC. 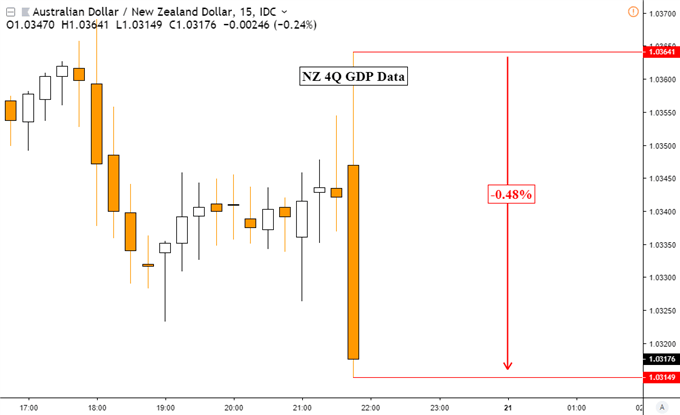 The surge in NZD/USD on Wednesday on the FOMC rate decision and New Zealand GDP data was the most potent since late January when using a daily basis. On the chart below, NZD/USD just barely closed at its highest since early December. However, it did not breach early February highs and it remains a robust area of resistance. Confirming another close to the upside exposes resuming the uptrend that began back in October. You may follow me on Twitter for the latest updates on NZD here at @ddubrovskyFX. 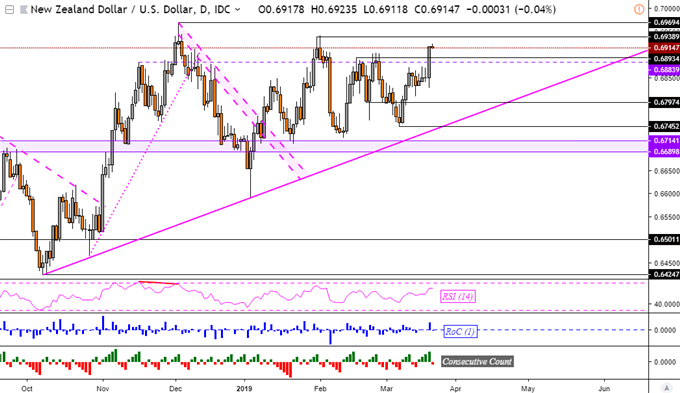