The global economy is slowing and major risks persist, with growth weakening much more than expected in Europe, according to the OECD’s latest Interim Economic Outlook.

“Economic prospects are now weaker in nearly all G20 countries than previously anticipated. Vulnerabilities stemming from China and the weakening European economy, combined with a slowdown in trade and global manufacturing, high policy uncertainty and risks in financial markets, could undermine strong and sustainable medium-term growth worldwide,” it argues.

The OECD projects that the global economy will grow by 3.3% in 2019 and 3.4% in 2020. Downward revisions from the previous Economic Outlook in November last year are particularly significant for the Eurozone, notably Germany and Italy, as well as for the UK, Canada and Turkey. 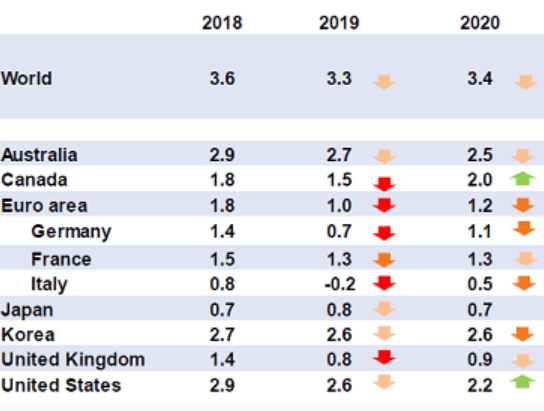 “The global economy is facing increasingly serious headwinds,” said OECD Chief Economist Laurence Boone. “A sharper slowdown in any of the major regions could derail activity worldwide, especially if it spills over to financial markets. Governments should intensify multilateral dialogue to limit risks and coordinate policy actions to avoid a further downturn,” she said.

The Outlook calls on central banks to remain supportive, but stresses that monetary policy alone cannot resolve the downturn in Europe or improve the modest medium-term growth prospects. A new coordinated fiscal stimulus in low-debt European countries, together with renewed structural reforms in all Eurozone countries would add momentum to a growth rebound, boost productivity and spur wage growth over the medium term, according to the OECD.