Crude oil is dropping again with prices plunging over 3 percent during Wednesday’s trading session. The latest move lower was sparked by the US Department of Energy’s weekly crude oil inventory data which showed another bulge in US crude stockpiles. The report follows last week’s disappointing DoE crude oil inventory numbers and marks the 8th weekly build in stockpiles out of the last 11 readings. 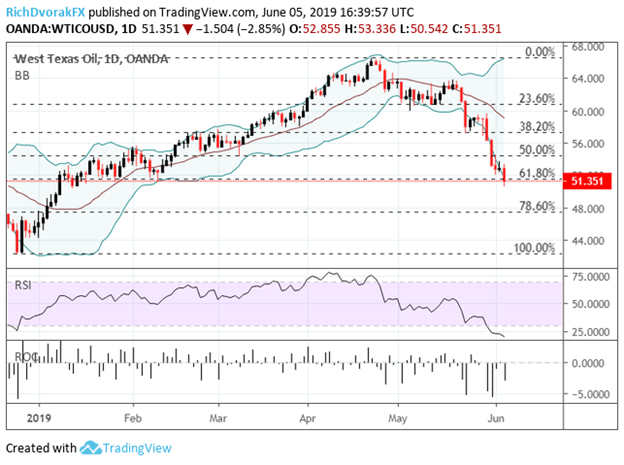 The persistent slide in crude oil prices since the recent peak of $66.46/bbl, which was printed back in late April, has mirrored the downshift in global economic growth expectations owing to escalating US China trade war tensions. The stark deterioration in trade talks between the world’s two largest economies has damaged prospects of GDP rebounding later this year, resulting in a cut to the World Bank 2019 Global GDP Forecast from 2.9 percent to 2.6 percent which was published yesterday.

The IMF followed suit this morning with its own warning that it could slash 2020 GDP estimates from 3.6 percent to 3.1 percent. The risk of weakening global growth expectations weighing further on crude was highlighted in this week’s oil price outlook – a trend that threatens to continue to dragging oil prices lower as demand for the commodity wanes along with global trade.

This morning’s ADP employment data could also be pulling crude oil prices lower as the report is likely weighing negatively on market sentiment. Yet, faltering US economic data is boosting the prospect that the Federal Reserve will cut interest rates this year which is weakening the greenback – a factor that may slightly offset downside in US Dollar denominated crude oil prices. Although, considering markets are already pricing in a dovish Fed, any sign of a firm stance on monetary policy by FOMC officials risks a rebound in USD which threatens to exacerbate recent oil price weakness.