Oil quickly approaches the monthly-high ($60.39) as the Organization of the Petroleum Exporting Countries (OPEC) and its allies discuss a tentative Join Ministerial Monitory Committee (JMMC) meeting for May 19, and recent price action raises the risk for a further advance in crude as the Relative Strength Index (RSI) continues to flirt with overbought territory. 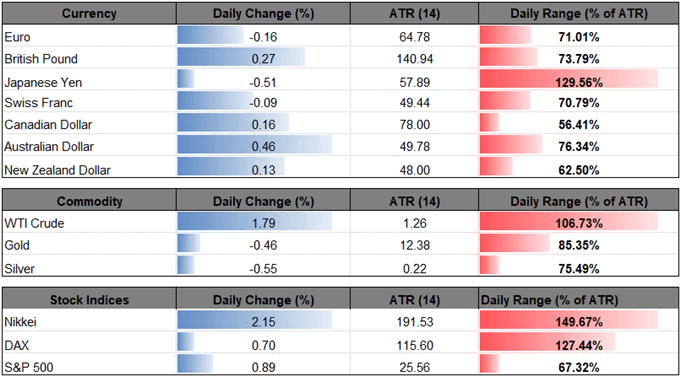 Oil extends the advance from the weekly-low ($58.17) and initiates a fresh series of higher highs & lows as Russia Energy Minister, Alexander Novak, states that ‘there has been such a suggestion’ for an impromptu meeting as the OPEC+ alliance is set to expire in June.

It remains to be seen if OPEC and its allies will continue to regulate production as the most recent Monthly Oil Market Report (MOMR) notes that ‘world oil demand is forecast to grow by 1.24 mb/d, unchanged from last month’s projections,’ and fresh data prints coming out of the United States, the largest consumer of oil, may keep energy prices afloat as crude inventories are expected to contract another 2500K in the week ending March 22 after tumbling 9589K during the previous period.

Keep in mind, the last update from the U.S. Energy Information Administration (EIA) also showed weekly field production bouncing back to 12,100K from 12,000K in the week ending March 8, and the current environment may generate higher oil prices amid the limited threat of non-OPEC supply. With that said, topside targets remain on the radar for crude, with recent price action raising the risk for a further advance as oil prices initiate another series of higher highs & lows, while the Relative Strength Index (RSI) continues to flirt with overbought territory. Sign up and join DailyFX Currency Analyst David Song LIVE for an opportunity to discuss potential trade setups. 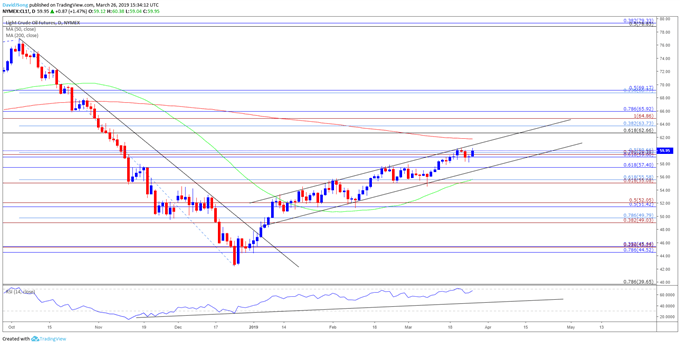