After clearing the April 2018 lows a couple of weeks ago, EUR/GBP has accelerated the dominant downtrend from the beginning of this year, falling about 0.8%. On the weekly chart below – which can be used to analyze prevailing trends in the medium-term – the pair is aiming to confirm another close to the downside. If that is the case by the end of this week, it leaves the Euro increasingly vulnerable to the British Pound.

The push towards 2016/2017 support, a range between 0.830 to 0.833, has fundamentally been driven by the Brexit saga. In a series of votes in the UK’s Parliament this week, the one that arguably produced the most aggressive Sterling gains was rejecting a ‘no-deal’ Brexit. I am closing following developments out of the nation and you may follow me on Twitter here @ddubrovskyFX to stay updated on EUR/GBP’s actions.

Taking a closer look at the EUR/GBP daily chart below, the pair had another retest of the falling trend line from early January after the 4-hour chart hinted of a climb in the short-term. It held, further solidifying it as a persistent barrier for bulls. Now, positive RSI divergence warns that downside momentum is fading after a cautious descent through 0.8528.

This may precede a turn higher, emphasizing resistance as the falling trend line (red line on the chart below). Otherwise, resuming the dominant downtrend has immediate support eyed at 0.8451. This is the 78.6% Fibonacci extension, which is drawn by using the decline in January (from the peak at 0.911 to 0.862) and the subsequent climb to 0.884. 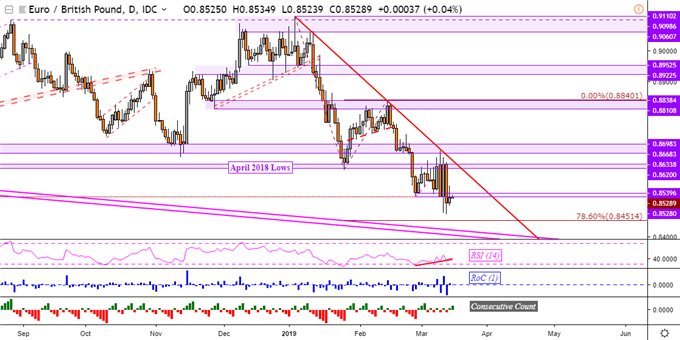