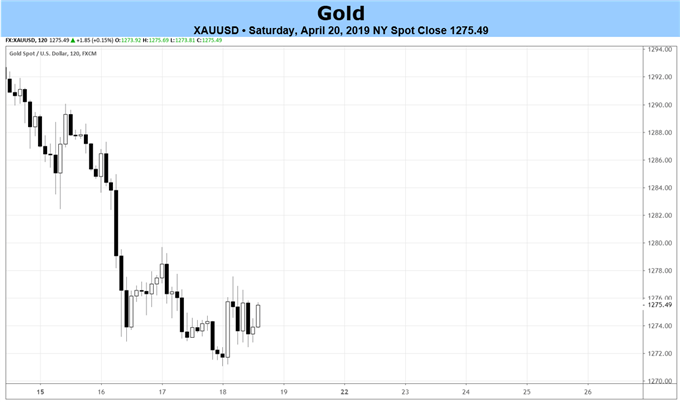 Fundamental Forecast for the Gold: Neutral

– Gold prices turned lower mid-week as a reinvigorated US Dollar sapped demand for bullion; the combination of strong US equities and a strong US Dollar has been historically negative for Gold prices.

– Brexit headlines will reappear now that UK parliament returns to session after its Easter-week holiday on April 23.

See our long-term forecasts for Gold and other major currencies with the DailyFX Trading Guides.

Gold prices continued their tumble in what has been a rough April, with fresh 2019 lows hit in several crosses. Gold in USD-terms (XAUUSD) dropped by -1.17% during the holiday shortened week, falling as low as 1271.07, its lowest level since December 27.

With risk appetite bolstered as US stocks maintained their gains, Gold prices were also hit versus the higher yielding, higher beta: in AUD-terms (XAUAUD) and CAD-terms (XAUCAD), Gold prices fell by -0.79% and -0.71%, respectively.

That other crosses like Gold in EUR-terms (XAUEUR) or in GBP-terms (XAUGBP) couldn’t reach new 2019 lows speak to the underlying weakness facing those currencies at present time.

Brexit News to Come Back to the Headlines

The past week offered a much-needed reprieve from the daily ebb-and-flow of Brexit headlines; a lack of progress in UK parliament warranted a break in public discussions. But Brexit headlines will reappear now that UK parliament returns to session after its Easter-week holiday on April 23. The coming week-plus could have significant influence on how the next several months unfold.

UK Prime Minister Theresa May and Labour party leader Jeremy Corbyn have been engaged in cross-party talks to find common ground for the EU-UK Withdrawal Agreement to pass through UK parliament. Early indications from both Labour and Tory party officials suggest that the talks will result in very little.

If nothing is agreed upon, it’s possible that UK PM May resigns or faces a no-confidence vote from Labour in May (see the full report regarding the near-term Brexit timeline: Next Brexit Steps to Prove Pivotal for EURGBP, GBPJPY, GBPUSD Prices). The fact is, a return of Brexit concerns to the newswire could prove to something that helps keep Gold prices afloat once more.

The US-China trade war talks continue to point towards de-escalation and ultimately a Trump-Xi summit at some point over the coming weeks. Commentary from officials on both sides of the Pacific indicate that a trade agreement could be struck as soon as early-May, with a meeting between the American and Chinese presidents some time in late-May. As has been the case, signs of progress and a relaxation of tensions have been a negative influence on Gold prices.

But as one trade war is seemingly subsiding (thanks in part to the US willing to overlook enforcement mechanisms and some of the longstanding intellectual property disputes), the US is seemingly ready to engage on another front: the EU. After the WTO ruled that the EU’s subsidies to Airbus (a French company) ran afoul of trade rules, the Trump administration outlined fresh tariffs against the world’s largest economic block. A new tit-for-tat war is emerging, and if so, a potential positive influence on Gold prices.

Top FX Events in Week Ahead

The upcoming economic calendar is sparsely populated with significant economic data, relegating traders to the newswire for event risk for Gold prices. Like the data seen over the course of the past week, upcoming inflation data should give central banks little reason to act one way or another. Neither the upcoming Bank of Canada nor the Bank of Japan will signal policy moves anytime soon. If anything, the late-week initial Q1’19 US GDP report should show that early-year US recession fears were overblown, limiting the scope for immediate dovish policy action by the Federal Reserve – and therefore, representing a late-week risk to Gold prices.