Since the last release of my 2019 forecast for the Brazilian Real, the political and economic landscape in both Brazil and the world has dramatically shifted. Central banks and international institutions like the IMF and WTO have trimmed growth forecasts amid deceleration in the US, China and EU. This comes on top of on an uncertain outlook for global politics and growing fears of new vulnerabilities in the financial system.

WHAT IS GOING ON IN BRAZIL?

Following the election in October, Jair Bolsonaro was elected President and now oversees the largest democracy and economy in South America. Markets cheered his arrival to office because of his economic adviser, Paulo Guedes – a University of Chicago-trained economist with a penchant for privatization. His addition to Bolsonaro’s team was really what fueled bullish sentiment for the Real and Ibovespa.

“There are no scared cows” Guedes stated on the campaign trail while advocating for selling stated-owned assets like Petrobras, a petroleum giant in the country. Due to the President’s unsolicited proclamation of being an economic novice, his appointment of Guedes as Finance Minister is what has been keeping investors optimistic about the new administration’s policy agenda.

The three main objectives Guedes has in his program are:

3. Cutting back on public expenditures

“[We] must control [the] explosion of public expenditures” he said in an interview at the Brookings Institution. The main point policymakers and investors alike have been paying close attention to have been the pension reforms. Over half of the federal budget is dedicated to pensions with the government spending over 12 percent of GDP on it – four percent higher than the eight percent average in wealthy OECD countries.

If public spending is not brought under control and regulatory reforms are not undertaken, there is growing concern about the future financial and economic stability of Brazil. Guedes’ objective is to redirect the trajectory and to open up the economy and become more business friendly to international investors. This message was conveyed by Bolsonaro at the conference in Davos, Switzerland and most recently at the White House when he met with President Donald Trump.

WILL BOLSONARO BE ABLE TO PASS THE PENSION REFORMS?

Since Bolsonaro took office, his administration has gotten off to a rocky start. Following several revisits to the hospital after his near-fatal stabbing in October, cabinet infighting has undermined confidence in the government’s perceived unity. There is also concern about allegations toward lower house speaker Rodrigo Maia, who has been accused of bribery as part of the ongoing Operation Car Wash investigation.

As a crucial player in pushing through the President’s reforms, the accusations against him could risk the bill being derailed or at the very least delayed. The government is eager to pass the reform this year because in 2020, lawmakers will be focusing on getting reelected. Supporting a piece of legislation that would raise the retirement age could anger their constituents and cost them political points.

The bill itself amends the constitution and is set to hit the lower house in May and will require 308 out of 513 votes before the legislation is moved to the Senate. In the meantime, the government has to deal with a fractured parliament where parties are constantly competing for power, with Bolsonaro trying to avoid forming coalitions. This is because he believes that the formation of alliances in the past led to compromise and corruption. 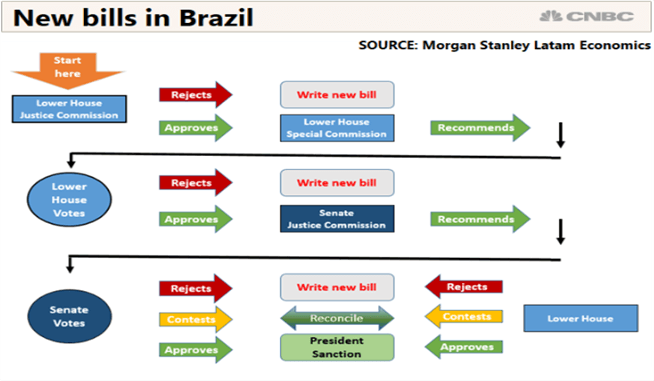 The political drama will continue to unfold and will almost certainly involve twists and turns along the way. Looking to stay up to date on Brazilian affairs and BRL, Ibovespa price action? Be sure to follow me on Twitter at @ZabelinDimitri.

WHAT IS THE OUTLOOK FOR THE GLOBAL ECONOMY?

The Brazilian Real and Ibovespa’s performance is also at risk from being derailed by the danger associated with rising concern about the outlook for global growth. As an emerging market economy – and now against the backdrop of tightened credit conditions – investors are now quicker to dump risky assets if forecasts indicate a slowdown and especially if the domestic political landscape looks unfavorable.

The IMF and World Bank recently slashed global growth forecasts, and central banks – like the ECB – have cut the inflation outlook. A significant contributor to the global slowdown has been in large part due to the US-China trade war. While the light does appear to be at the end of the tunnel, the US is on the verge of starting another with Europe while both parties continue to show broad economic weakness.

Even if a resolution to the US-China trade conflict is reached, it may not provide an adequate boost to market sentiment.Global and European PMI’s have been rapidly declining against the backdrop of growing fears that a recession is looming on the horizon. Furthermore, elevating levels of debt add an additional risk to financial markets as a new potential threat lurks beneath the surface.

HOW WILL BRAZILIAN REAL, IBOVESPA PERFORM IN 2019?

Since Bolsonaro’s victory in the 2018 Presidential election, the Ibovespa at its peak rose over 15 percent, but subsequently retreated and has since shed over six percent. However, the Real has not fared too well. Since October 31 it has lost over five percent against the US Dollar, and year-to-date it has shaved off over three percent as the outlook for Bolsonaro’s reforms progressively got muddier over time. 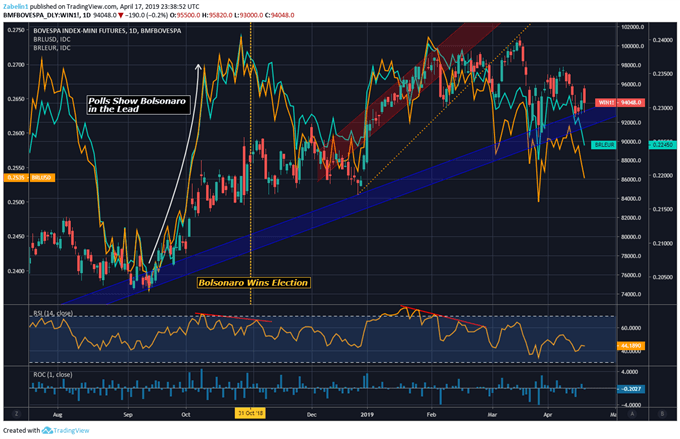 The Real and Ibovespa index’s performance is closely tied to the status of Bolsonaro’s pension reforms. The country’s shaky finances have essentially acted as a moat of risk that investors have not yet been ready to traverse with confidence. The Real’s performance since Bolsonaro’s election has been rising and falling almost in complete lockstep with developments on the pension reform.

Between December 3 2018 – January 3 2019, the Brazilian Real had the second-best spot return in emerging market currencies, only second to the Mexican Peso. This was when forecasts were indicating an optimistic outcome for the pension reform and it looked as if both the lower house and the Senate would have approved of the bill by August.

However, since January, the number of obstructions and potential complications have been rising along with greater angst over whether the bill will pass. Consequently, the Real has been slipping alongside investors’ confidence. Year to date, it is now the third-worst emerging market currency in spot returns, only above the Turkish Lira and Argentine Peso.

If Bolsonaro is able to pass his structural bills, it could be followed by a massive flood of capital into the country and end up boosting the currency and index. However, if global conditions by that point have deteriorated even further, the uptick would likely be more muted because investors would have greater trepidation in chasing yields in a risk-averse environment.

If the reforms are not passed and the global economy continues to show weakness, this would apply twice the pressure on Brazilian assets and could result in an aggressive selloff. Since the Fed’s rate hike rampage in 2018, the cost to borrow the US Dollar has risen over 100 basis points. According to the Bank of International Settlements, over 80 percent of global transactions are conducted in the Greenback.

For this reason, investors would be more cautious with their capital because of the comparatively higher cost of losing it – hence the predilection for capital preservation. Bolsonaro’s pension reforms and the overall global landscape are the two main themes that will likely continue to drive price action in Brazilian assets throughout the year. Therefore, watching how these narratives unfold is both prudent and essential to ensuring a well-informed trading strategy.