AUD/USD has gapped higher following the Federal election, but attention now turns to the Reserve Bank of Australia (RBA) Minutes, with the Aussie Dollar exchange rate at risk of facing a more bearish fate as the central bank shows a greater willingness to further insulate the economy.

The Australian dollar appears to be catching a bid with Prime Minister Scott Morrison on track to implement tax cuts and boost infrastructure spending, but it remains to be seen if the upcoming changes in fiscal policy will deter the RBA from reestablishing its easing-cycle as the central bank warns ‘that a further improvement in the labour market was likely to be needed for inflation to be consistent with the target.’

The RBA Minutes may reveal a further change in the forward-guidance for monetary policy as ‘the inflation data for the March quarter were noticeably lower than expected,’ and Governor Philip Lowe & Co. may prepare Australian households and businesses for lower interest rates as private-sector consumption continues to be ‘affected by a protracted period of low income growth and declining housing prices.’

In turn, a batch of dovish comments is likely to drag on AUD/USD as it fuels bets for an imminent rate-cut, with the Australian Dollar at risk of facing headwinds ahead of the next RBA meeting on June 4 especially as the U.S. and China, Australia’s largest trading partner, struggle to reach a trade agreement, but the recent rebound in the Aussie Dollar exchange rate appears to be spurring a shift in market participation as retail sentiment comes off an extreme reading. 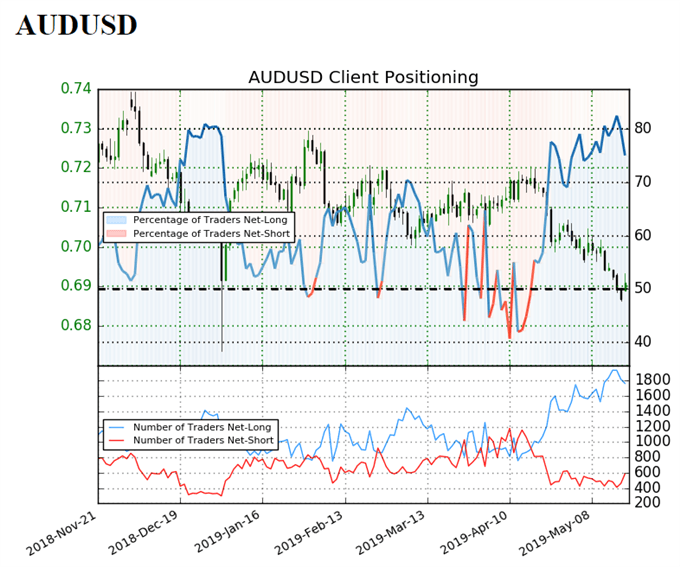 The last time the sentiment index showed a similar dynamic was just ahead of the currency market flash-crash in January, with net-long exposure still heavily skewed ahead of the RBA Minutes. A further pickup in net-long interest may continue to offer a contrarian view as AUD/USD struggles to retain the rebound from the 2019-low (0.6745), but recent price action also appears to be spurring a rise in in net-short interest as Aussie Dollar gaps higher following the election. 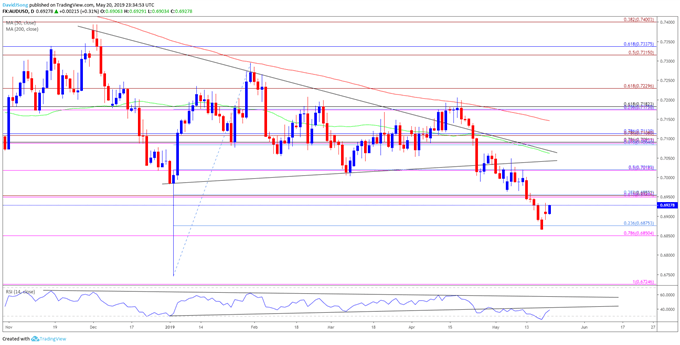