Updates to Canada’s Consumer Price Index (CPI) may curb the USD/CAD advance following the Federal Reserve interest rate decision as the headline reading for inflation is expected to hold steady at 1.4% per annum in February.

Signs of sticky price growth may boost the appeal of the Canadian dollar as it puts pressure on the Bank of Canada (BoC) to further embark on its hiking-cycle, and another 1.4% print may push Governor Stephen Poloz and Co. to endorse a hawkish forward-guidance at the next meeting on April 24 as the central bank ‘expects CPI inflation to be slightly below the 2 per cent target through most of 2019, reflecting the impact of temporary factors.’

However, an unexpected slowdown in Canada’s CPI may fuel the recent advance in USD/CAD as it dampens bets for a BoC rate-hike, and a below-forecast print may encourage Governor Poloz and Co. to alter the outlook for monetary policy as officials warn ‘it will take time to gauge the persistence of below-potential growth and the implications for the inflation outlook.’

Canada’s Consumer Price Index (CPI) narrowed to 1.4% from 2.0% per annum in December, while the trimmed core reading for inflation held steady at 1.9% for the third consecutive month. A deeper look at the report showed the weakness was largely driven by a 3.1% decline in energy prices, with the cost for Transportation also slipping 1.0% in January, while food prices increased another 0.8% after rising 1.0% the month prior.

The Canadian dollar gained ground following the stickiness in the core CPI, but the reaction was short-lived, with USD/CAD bouncing back from a low of 1.3118 to close at 1.3156. Review the DailyFX Advanced Guide for Trading the News to learn our 8 step strategy. 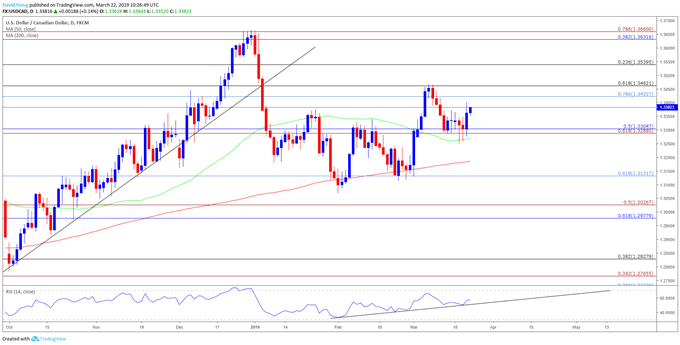