Updates to China’s Consumer Price Index (CPI) may influence the near-term outlook for AUD/USD as the headline reading for inflation is expected to increase to 2.5% from 2.3% per annum in March.

Positive developments coming out of China, Australia’s largest trading partner, may impact the near-term outlook for AUD/USD as the Reserve Bank of Australia (RBA) keeps the official cash rate (OCR) on hold ahead of the Federal election on May 18.

Indications of a resilient Chinese economy may heighten the appeal of the Australian dollar as it encourages the RBA to retain a wait-and-see approach, and Governor Philip Lowe & Co. may stick to the same script at the next meeting on June 4 as ‘the outlook for the global economy remains reasonable.’

In turn, a CPI print of 2.5% or higher may generate a rebound in AUD/USD, but a below-forecast reading may produce headwinds for the Australian dollar as it puts pressure on the RBA to further insulate the economy.

China’s Consumer Price Index (CPI) climbed to 2.3% from 1.5% per annum in February to mark the highest reading since October 2018. A deeper look at the report showed higher food prices leading the advance, with the gauge climbing to 3.5% from 1.2% during the same period, while transportation costs increased 0.1% in March after contracting 1.2% the month prior.

The in-line prints spurred a limited reaction in the Australian dollar, but AUD/USD struggled to hold its ground throughout the day, with the exchange rate closing the session at 0.7123. Learn more with the DailyFX Advanced Guide for Trading the News. 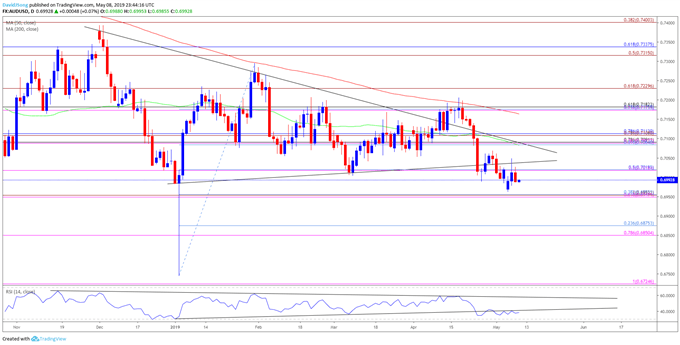