Check out the fundamental and technical forecast for stocks as they rise towards record highs in the Q2 Equity Markets Forecast.

Lately, I’ve been focused on the rising wedge forming in the S&P 500, and with it still trading inside the pattern it continues to be a focal point. The scenario where the market breaks through the top-side is looking increasingly likely, but as pointed out last week, since record highs are just ahead it could result in a false breakout and reversal as sellers show up. Or maybe not…

A breakout to new record levels and momentum could pick up, which is why paying attention to how it unfolds is important. Around major thresholds such as record highs, even if the market is to continue marching on, volatility has in the past rose as eager sellers show up. This would be a welcomed event of course for the short-term two-way trader.

If in the event the market rolls over from here, then a traditional bearish trigger could be in place for the rising wedge, but this is looking like an increasingly lower probability outcome.

Traders are generally short the S&P 500, find out on the IG Client Sentiment page what this could be for prices moving forward. 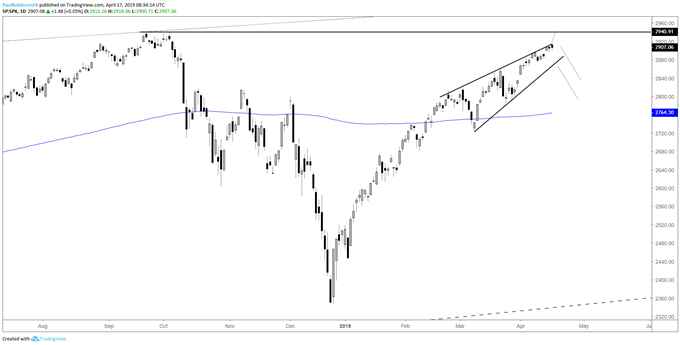 Dow Jones wedging up too, 500 points from high

The Dow is working on a rising wedge of its own, with the price action since about a month ago narrowing to a point. As goes the S&P goes the Dow. The underside of the wedge is also the trend-line off the December low and so a downside wedge-break could usher in sellers quickly. However, the trend is still higher and as said regarding the S&P a top-side break is looking increasingly likely. A move higher will have focus on the old record high at 26951.

The Nasdaq 100 came only a few points away from a new record close yesterday. Watch how price action plays out here as the market tries to climb to a new record high. A forceful rejection would bring into play the trend-line off the December low and June ’16 slope. For now the benefit of the doubt remains higher but that could change towards at the least a more tradable two-way market even if a new high is obtained as new highs are often tested not long after getting achieved.

To learn more about U.S. indices, check out “The Difference between Dow, Nasdaq, and S&P 500: Major Facts & Opportunities.” You can join me every Wednesday at 10 GMT for live analysis on equity indices and commodities, and for the remaining roster of live events, check out the webinar calendar.

Whether you are a beginning or experienced trader, DailyFX has several resources available to help you; indicator for tracking trader sentiment, quarterly trading forecasts, analytical and educational webinars held daily, trading guides to help you improve trading performance, and one specifically for those who are new to forex.