Political drama in Westminster may take canter stage in European trading hours after the UK House of Commons appeared to have wrestled control of the Brexit process from the government of Prime Minister Theresa May. A series of “indicative votes” meant to gauge MPs’ appetite for a variety of EU withdrawal configurations and perhaps even a second referendum are due Wednesday.

In the meantime, traders will no doubt monitor the flurry of lead-in activity with great interest. Gauging which options might have the most broad-based support as well as the likelihood that Ms May will respect the polling’s outcome – either by implementing it or stepping aside – may drive seesaw British Pound volatility. Lasting directional follow-through seems unlikely for now however.

On the data front, a revised set of fourth-quarter French GDP figures as well as US housing and consumer confidence statistics. Disappointing outcomes echoing the recent trend toward underperformance relative to forecasts (see chart below) may feed global growth concerns and sour sentiment, boosting the anti-risk Japanese Yen while hurting the likes of the cycle-sensitive Australian Dollar. 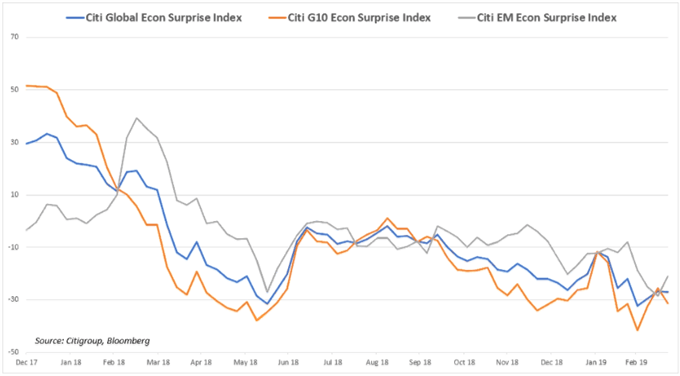 Citigroup helpfully tracks the tendency of economic data outcomes across a variety of countries and groupings to deviate from baseline forecasts, either in the positive or negative direction. A macro view sizing up the overall global index as well as independent measures for the G10 and emerging market (EM) economies reveals that data flow as steadily deteriorated since mid-2018.

Broadly speaking, this suggests that realized economic outcomes have tended to be worse than analysts’ models anticipated for the better part of nine months. Against this backdrop, it seems hardly surprising that investors have turned skittish. If the downward revision of projections continues to lag the pace of deterioration in economic conditions, risk aversion is likely to remain the path of least resistance.