– The US Dollar has fallen only slightly this week thus far as traders have been awaiting the results of the Fed meeting.

– A new Summary of Economic Projections will likely produce weaker growth and inflation forecasts, as well as a reduced glide path of interest rates (dot plot).

The US Dollar (via the DXY Index) has fallen slightly at the start of the week despite no significant US economic data having been released. As traders await the results of the Federal Reserve’s March 19-20 FOMC meeting, traders have temporarily suspended their gaze from the latest Brexit developments or the US-China trade war talks. How long markets stay focused on the Fed, however, depends on whether or not Fed Chair Jerome Powell is able to maintain the confidence of market participants.

It wasn’t too long ago that market participants were in angst over the Federal Reserve’s communication policy under Fed Chair Powell. Recall the evolution of his commentary since the end of October:

– On October 3, 2018 he indicated that be believed that “we’re a long way from neutral at this point, probably,” implying that many more rate hikes were coming.

– Then, on November 28, he seemingly hedged, saying that rates are “just below” neutral, implying that the Fed was nearing the end of its hike cycle.

– At the FOMC meeting on December 20, the Fed’s glide path of interest rates was reduced.

– On January 4, Fed Chair Powell said that he was ‘open to changing normalization,’ saying the Fed “will be patient” on rates, in effect striking the “Powell Put.”

– On January 30, the FOMC declared that its balance sheet runoff wasn’t on autopilot, and could possibly cease at some point in the future.

…But He May Have Righted the Ship in Recent Weeks

Maintaining the view taken at the January FOMC meeting, Fed Chair Powell has said in recent weeks that the FOMC does “not feel any hurry” to raise rates again soon. He has seemingly ‘righted the ship’ in recent weeks after a rough stretch of communication from the end of October through January.

Evidently, there has been some concern over the state of the US economy due to the US government shutdown from December 23 to January 25– the Atlanta Fed GDPNow growth tracker shows Q1’19 GDP at a mere +0.4% annualized – as well as how quickly price pressures would stabilize following the downturn in energy prices during Q4’18.

Summary of Economic Projections Will Be Cut; Rate Cut Not Eliminated on Dot Plot

Full-tilt dovish would be if the Fed downgraded its growth and inflation forecasts and completely eliminated any avenue for a rate hike in 2019. From one perspective, rates markets see this to be the case, given that there’s a 25% chance of a 25-bps rate cut being priced-in by the end of the year. 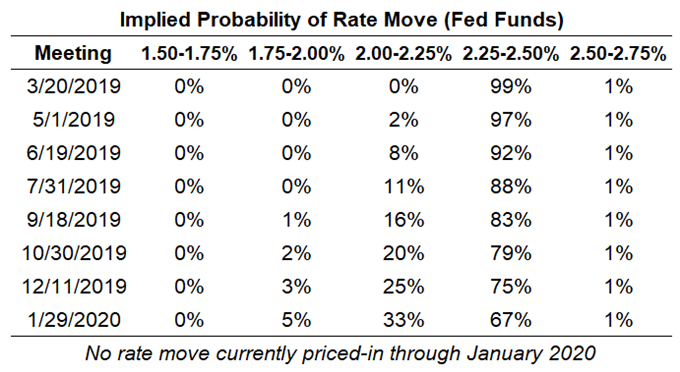 Accordingly, the biggest source of volatility for the US Dollar will come from the updated Summary of Economic projections. The US government shutdown and the sharp decline in energy prices at the end of last year give good reason to believe that cuts are coming to the 2019 growth and inflation forecasts. 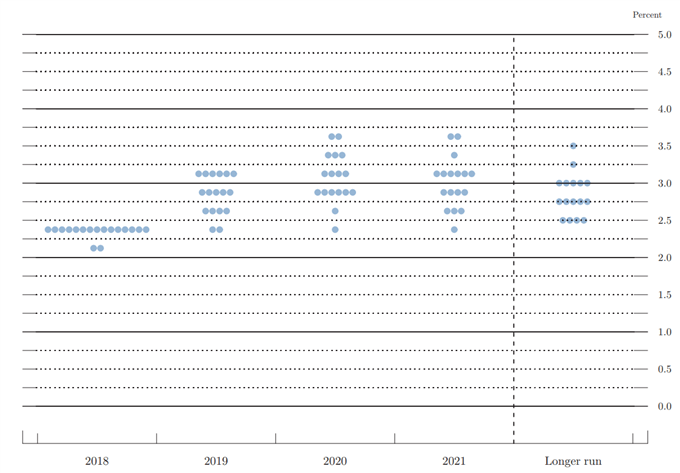 But the fact of the matter is that wage growth is at its highest level seen in decades and the labor market is producing the lowest unemployment rate in nearly 50-years, two clear indicators that, at least in the near-term, the Fed isn’t ready to go full-tilt dovish yet. It’s possible that Fed Chair Powell leaves open a path for at least one hike in 2019 – even if Fed funds futures aren’t pricing such an event.

Such divergence between what the Fed wants to do and what the market thinks the Fed will do typically yields higher than normal volatility. 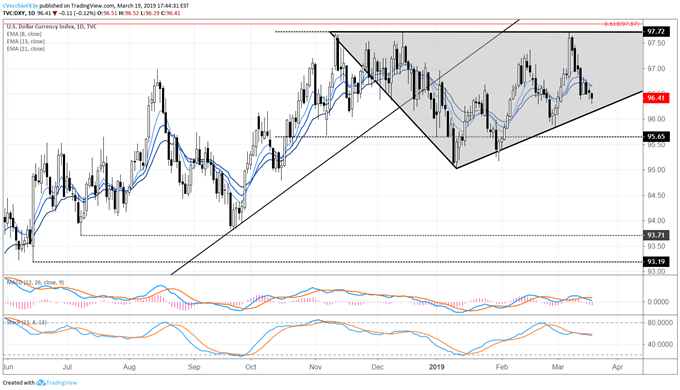 Ahead of the Fed meeting this week, the DXY Index’s forecast is still neutral. US Treasury yields haven’t moved enough in the pre-Fed trading sessions to warrant a significant change in outlook either. Accordingly, price remains within an ascending triangle in place since November. Triangle support comes in around 96.25 through the end of the week; below here, and bears may start to take control.

If no rate move is already priced in, and traders are expecting cuts to the Summary of Economic Projections given the pricing of a potential December cut, potential downside opportunities for the US Dollar may be limited. If bullish potential is to emerge post-FOMC, then a move back above the daily 8-, 13-, and 21-EMA envelope is the first hurdle to clear; that means we need to see at least 96.67 achieved by the end of this week.

Read more: US Dollar Steadies Ahead of Fed Meeting as US Treasury Rates Rebound